Hopping Around the World

The lovely Catherine at Knotted Cotton has very kindly invited me to take part in this Round The World Bloghop that seems to be taking the world by storm. So it's great to have this chance to introduce myself to you perhaps.

I suppose I'm a bit of a globetrotter really. I was born in the UK and lived there until I was 10 when my family moved to the other side of the world, sight unseen:Auckland, NZ. Since then I've lived in the small university town of Dunedin NZ; London; Dunedin again, travelling back from London via the overland route; then Melbourne, Australia; Auckland; Dunedin (again); Adelaide, Australia and now Dunedin has called us back again, perhaps finally? but never say never! I feel blessed to have had to chance to live in lots of places and to live in a beautiful place which I find really energising. Just sometimes I wish I could combine all the places and people I've loved in one location! Dunedin is on the East coast of the South Island of NZ and probably has a similar climate to Scotland, tho' we are a bit closer to the equator, so get a bit more sunlight hours in the winter perhaps?!

What I am working on

Usually several things! Currently I am finishing a quilt top for our friend's 50th birthday, even though it was nearly a year ago. I hope he likes it, but I have enjoyed making it improvisationally using my new design wall.   I have two long seams to finish the top and then I have some quilting ideas to execute. 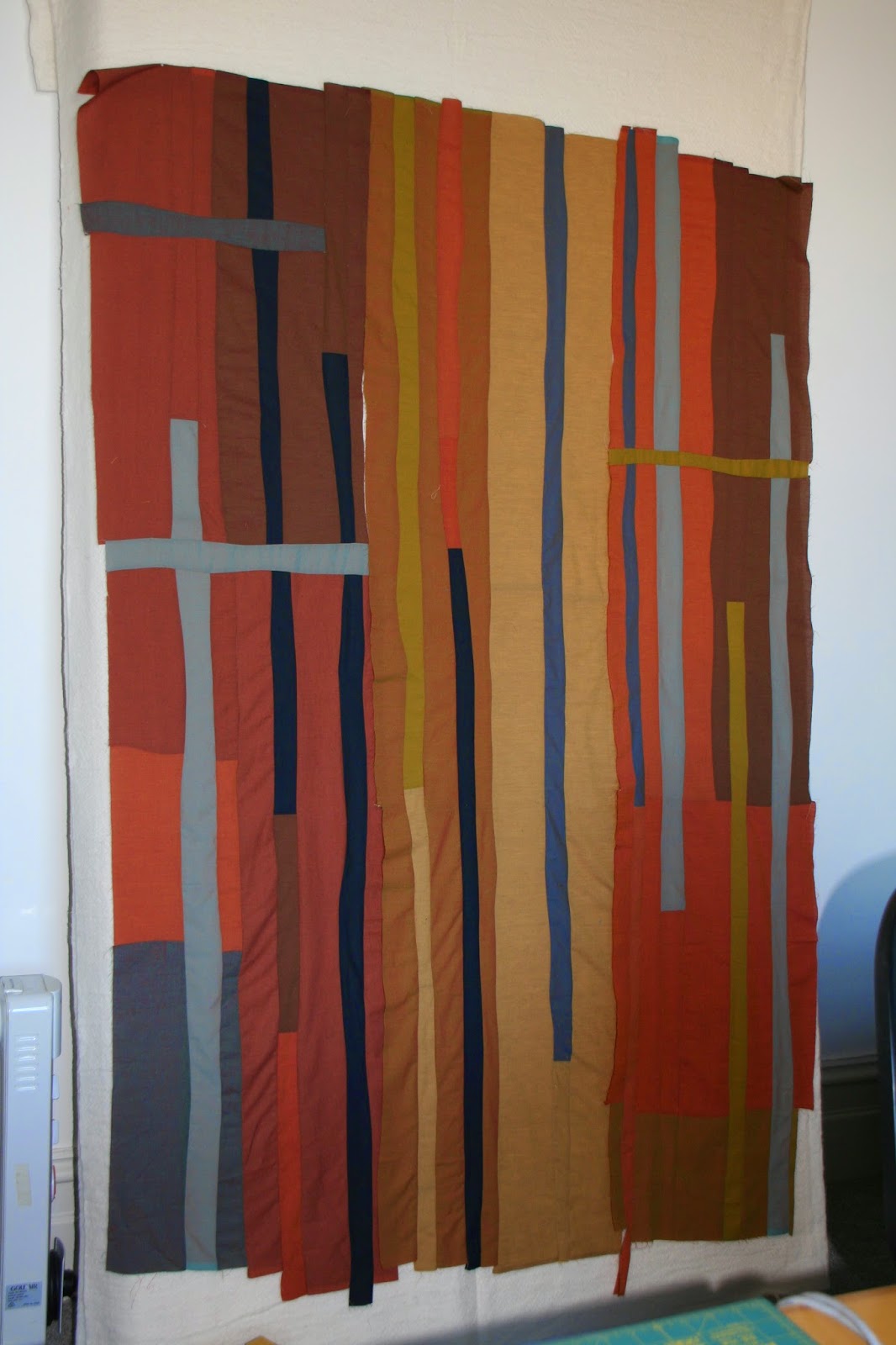 I'm working on organising my sewing room, which is a new treat; although it periodically has to become the guest room, it's great to be able to leave stuff messily lying around- though that may actually have happened quite a bit when I was using the dining room table too! 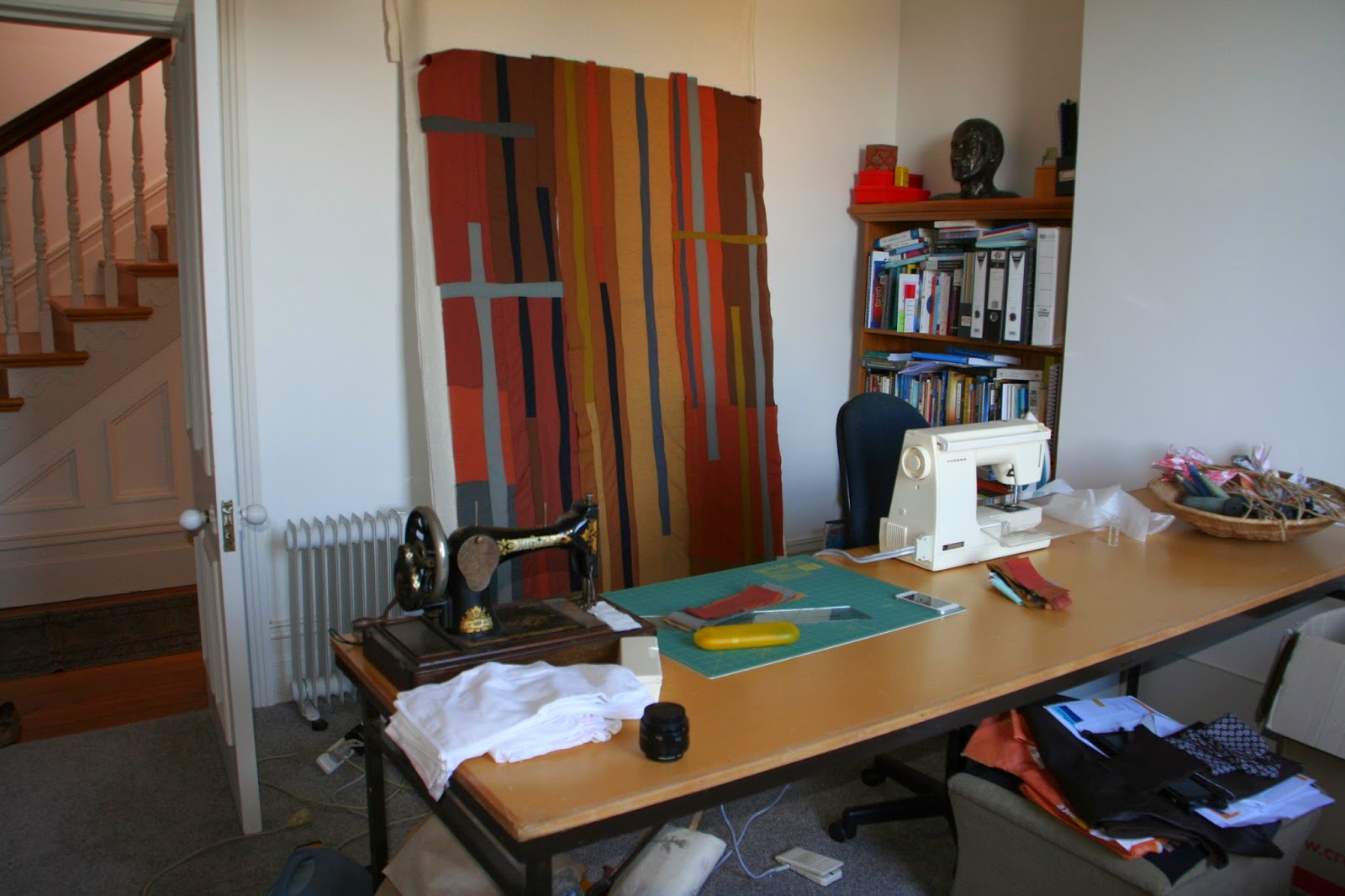 I've gleaned lots of cotton shirts whose collar and cuffs have had it, from my husband and my brother and I'm working on cutting them up to make a striped quilt in the style of Kaffe Fassett's Stripescape but in blues and generally more muted. Turns out there's a LOT of fabric in a shirt! 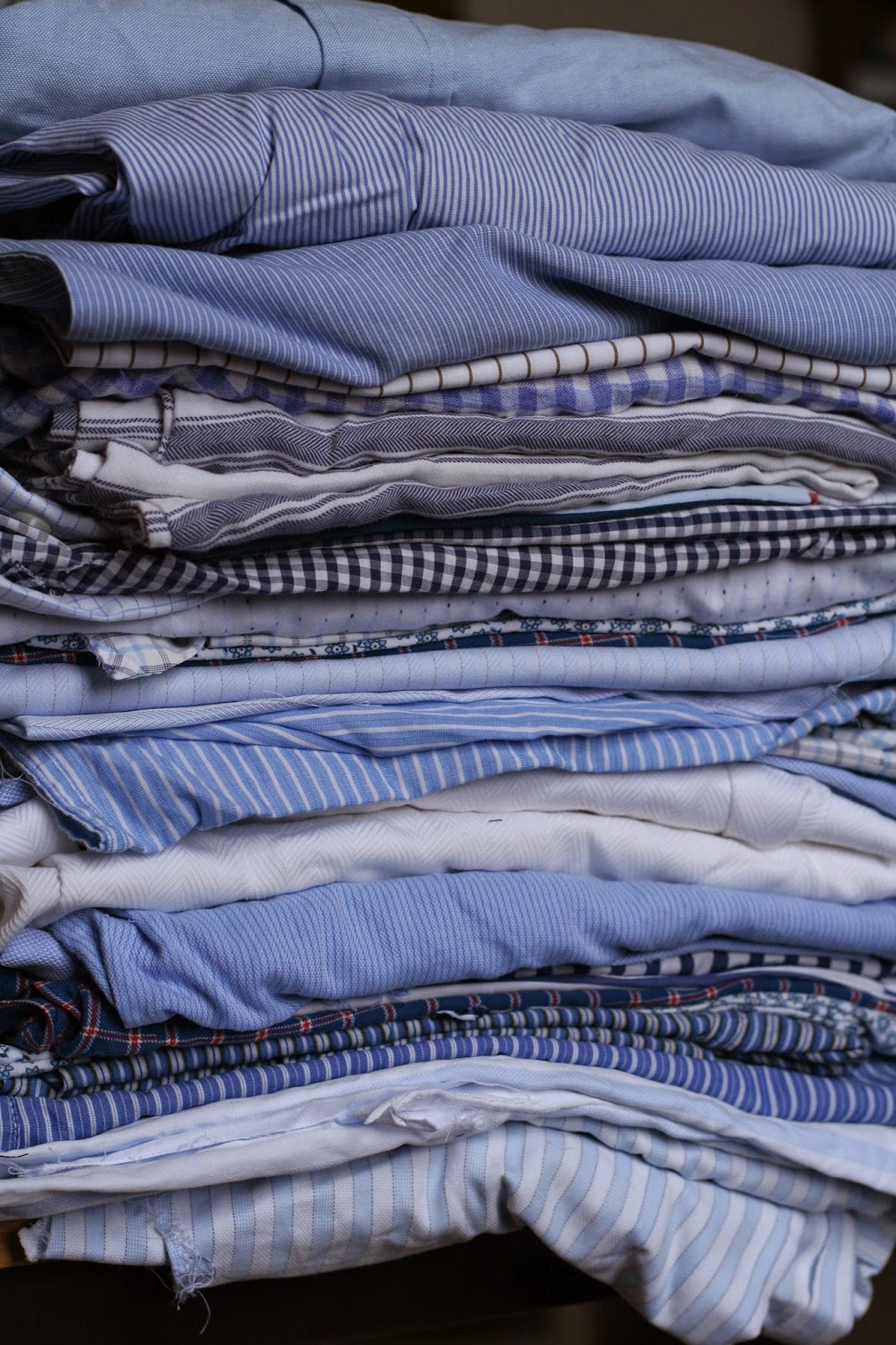 I'm cutting them into 2 and 3" strips of random lengths, which is quite a task! 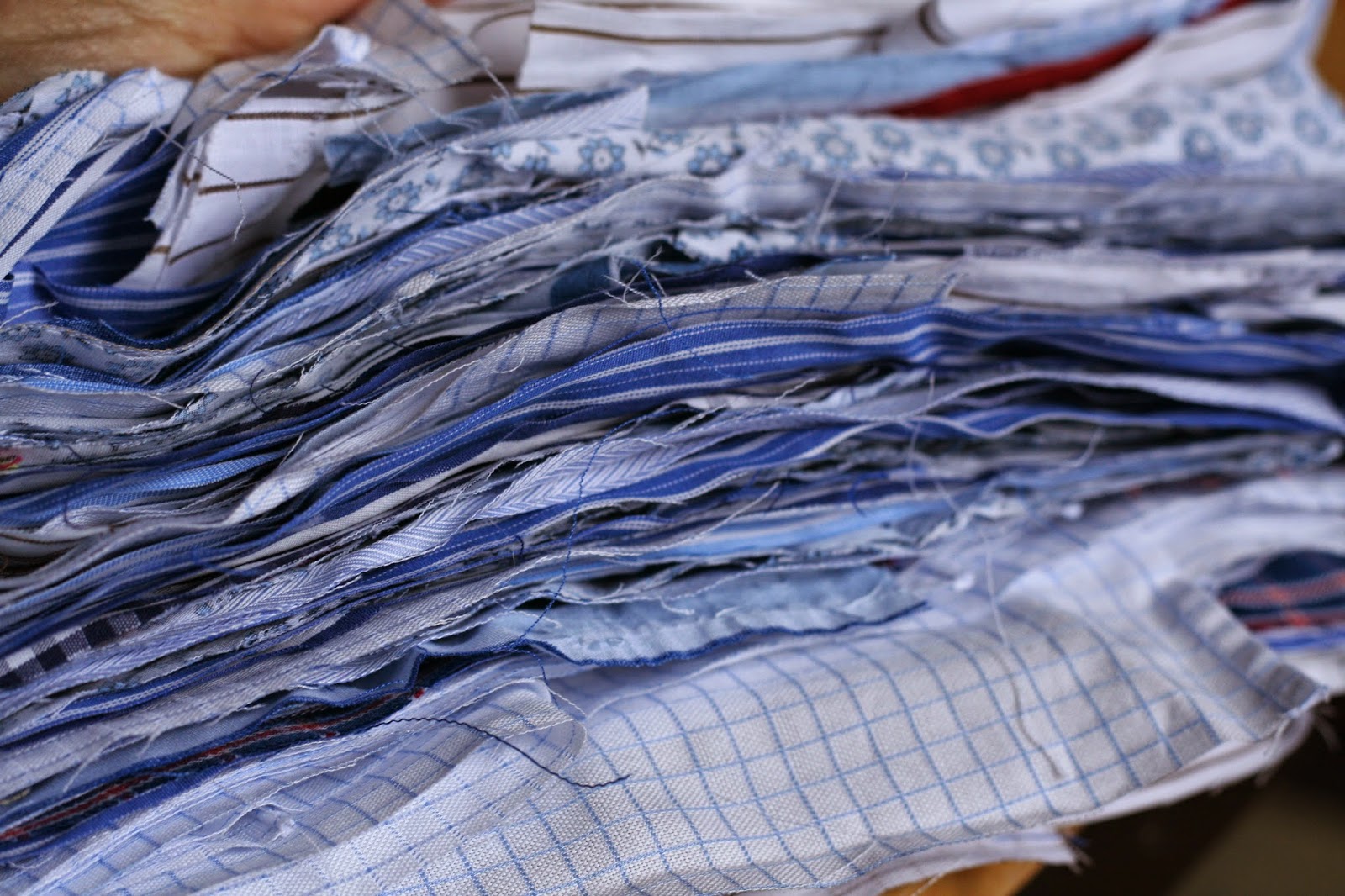 I also have two bee quilts for the Do. Good Stitches bee which I'm currently responsible for finishing
And a quilt to finish from another bee I was in last year- stalled because everyone's 1/4" seam seems to vary...!

And a cross quilt which is slightly stalled. I'm in the process of fine tuning the colours. I'm thinking of narrowing the palette a bit emphasising the charcoal, mustard and aqua.  Input welcome?! 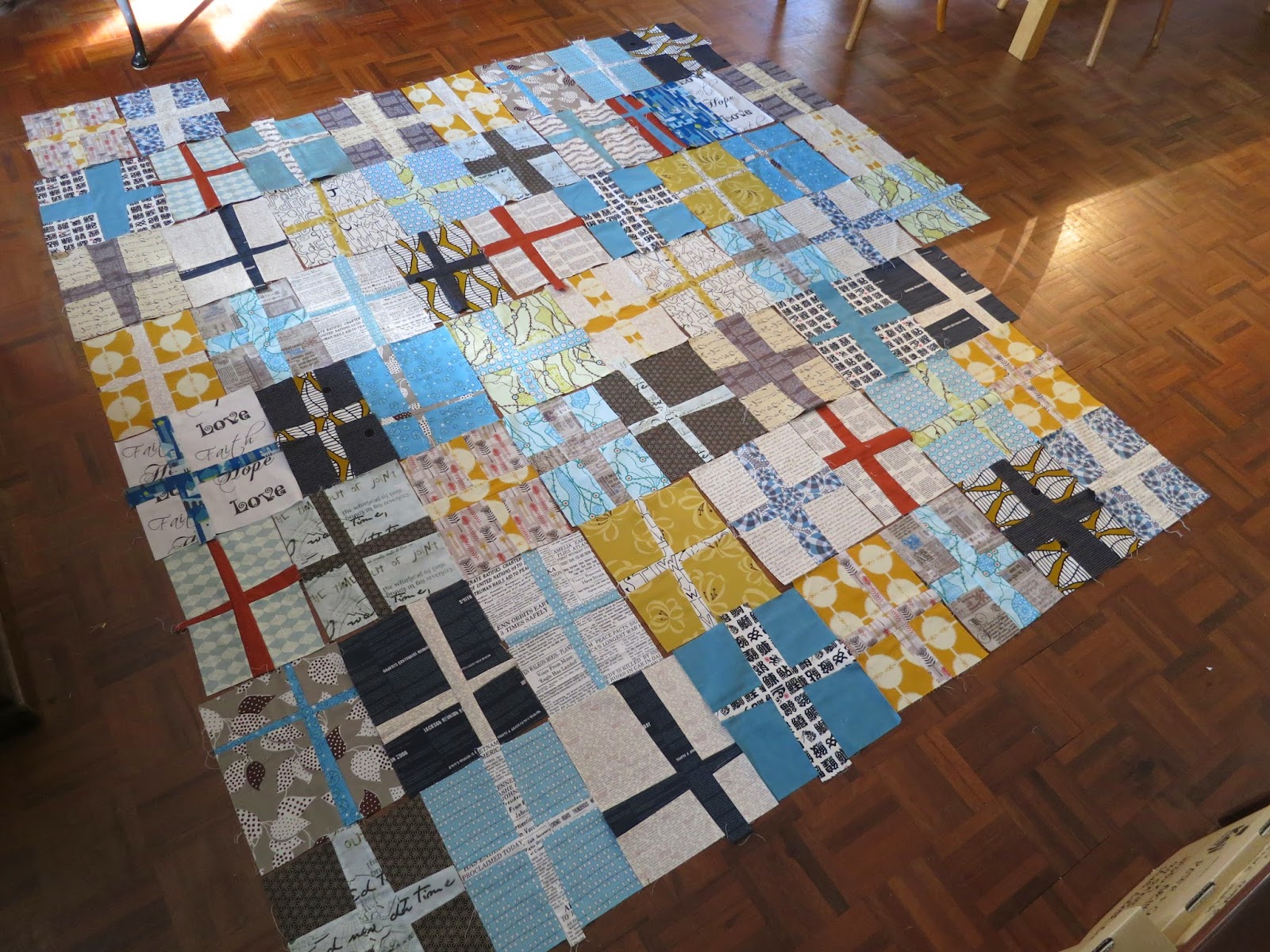 I caught up with a dear friend in Melbourne last week and we plan to make a collaborative project with sand as the inspiration. 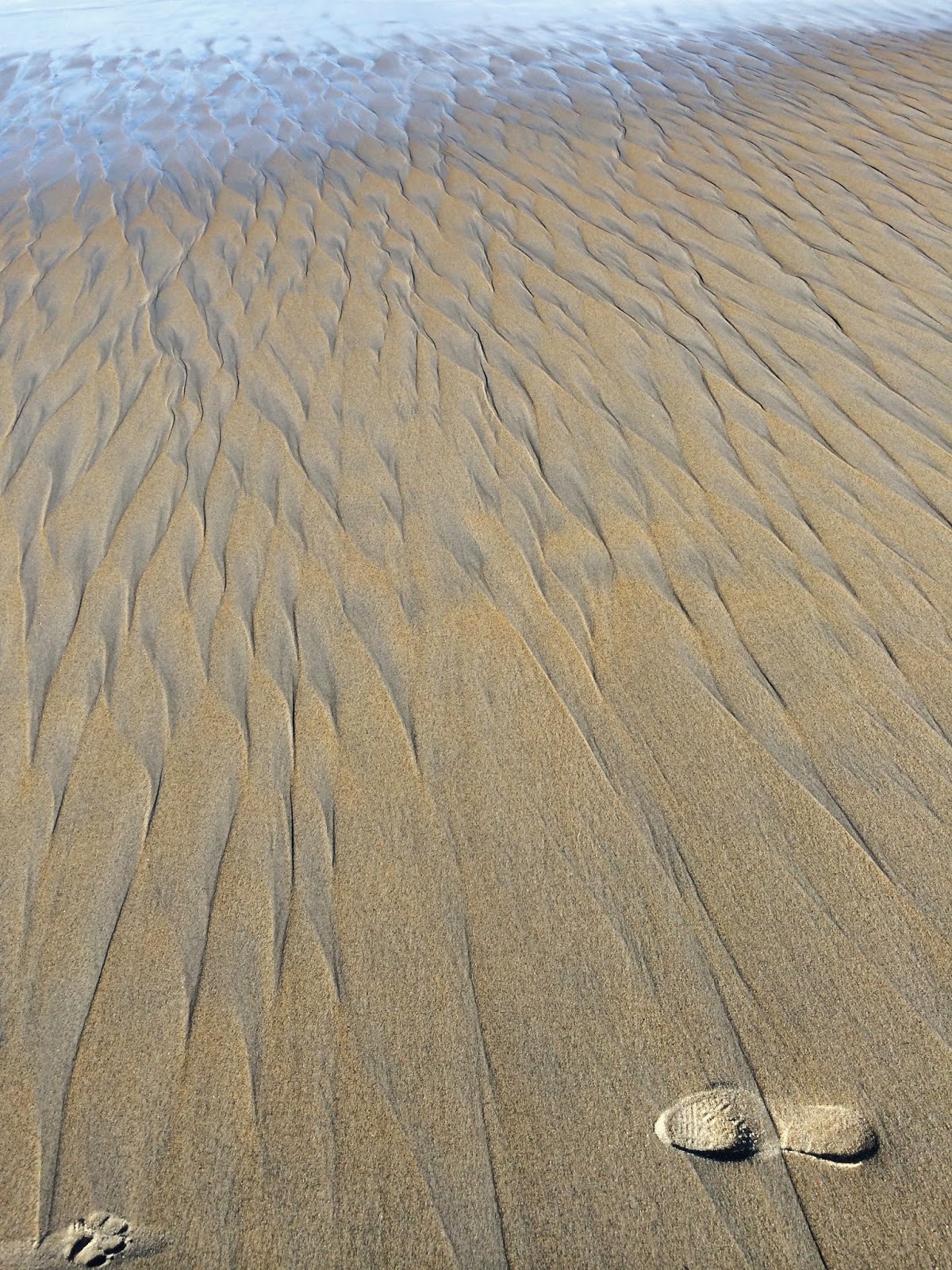 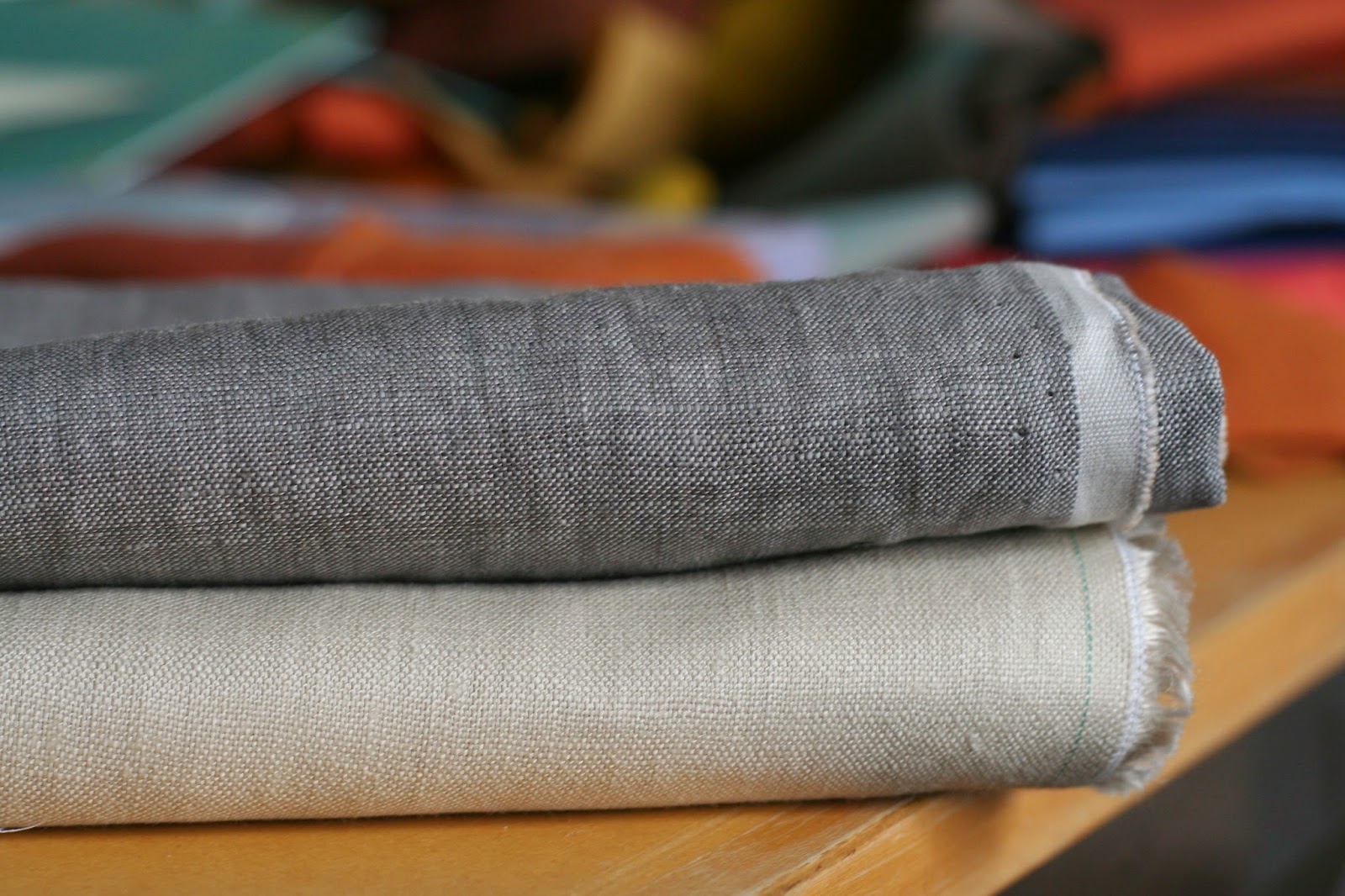 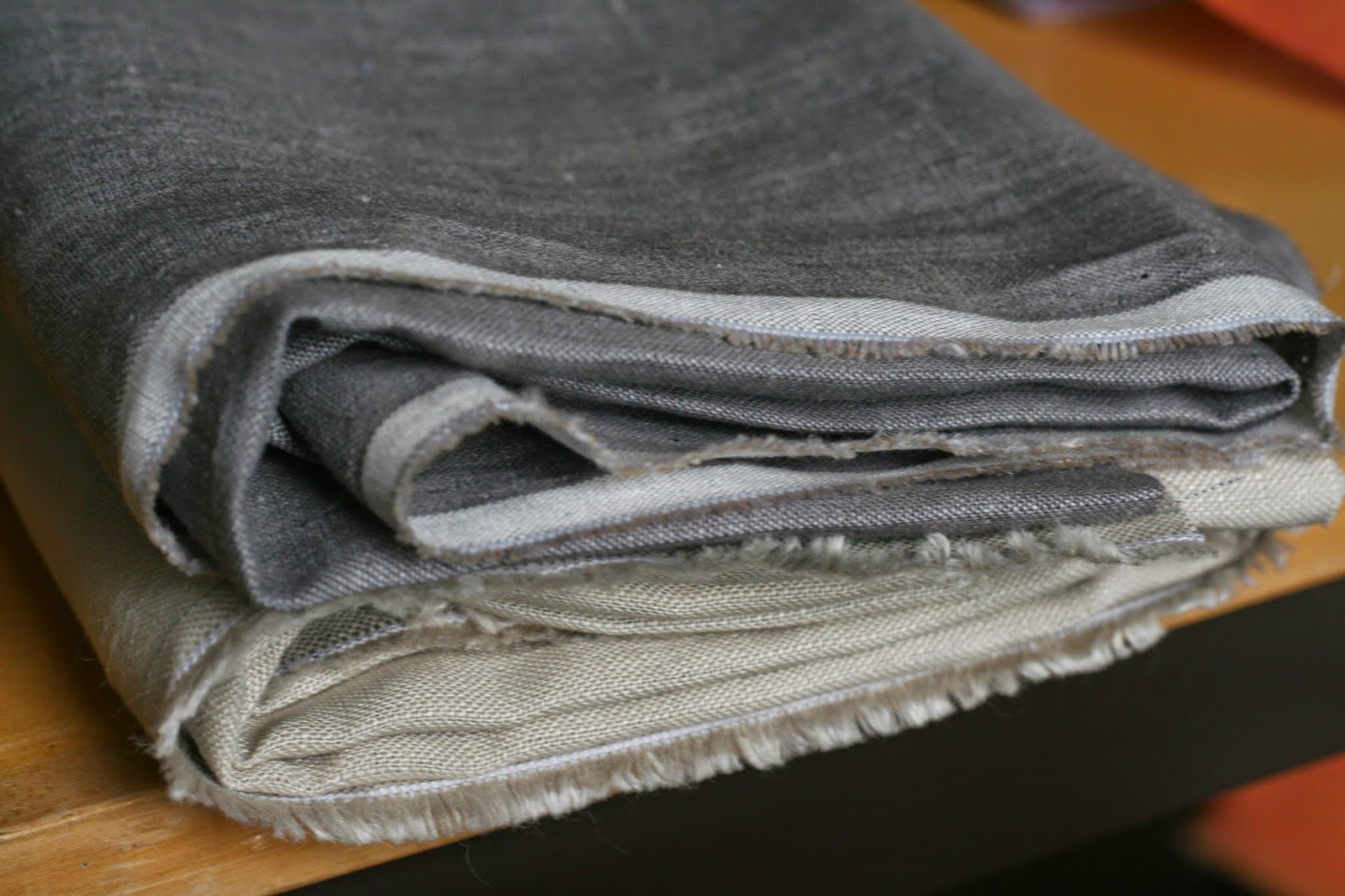 I have a stack of shot cottons to make our son a new quilt for his 21st- hmm that's next month...!

And about a million other ideas which may or may not come to fruition.

The natural world is generally the source of my inspiration and I have another gum tree quilt sort of planned. The idea involves Oakshott shot cottons and chevrons I think...

How My work differs From Others in Its Genre

I don't think I have a particularly identifiable style yet. I am happy in the modern quilting zone, but think I have lots to learn from the more traditional quilters. I like being part of a bee for trying new things and using scraps, with the excuse that it's for charity; 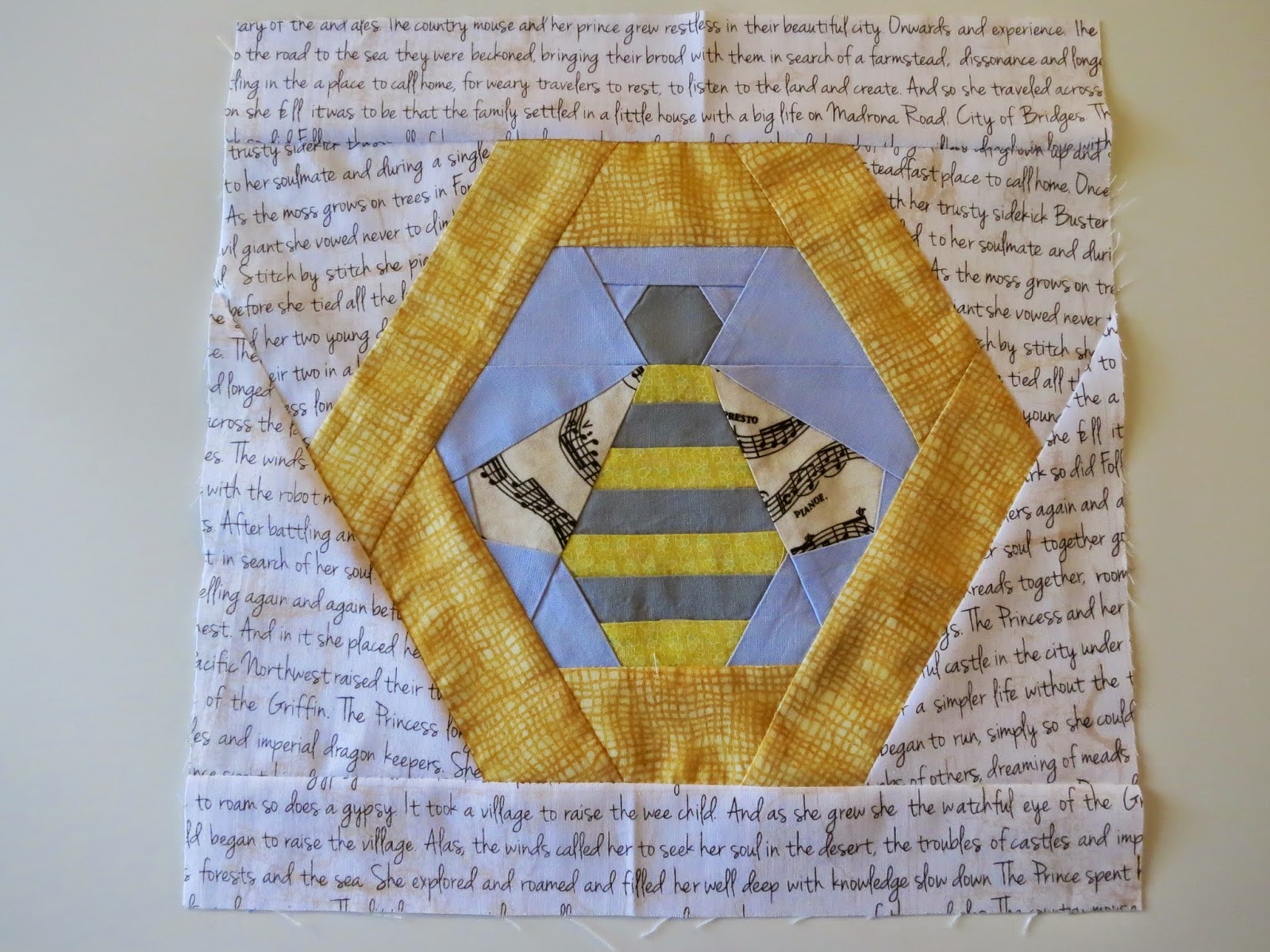 but when I don't have much time for sewing that can be all I manage which is a bit frustrating sometimes.

Because I enjoy it. For me the point of having a blog is to participate in a community which inspires me and to give myself a bit of a sense of accountability, mainly to myself, to document what I make and therefore achieve more- but it's not been working very well lately! I want to learn about process rather than being too focussed on having a perfect outcome, which has prevented me from having a go in the past.

How My Creative Process Works:

Generally it's things I see in the natural world that inspire me, colours or patterns or shapes. Photography helps me recall. For the gum tree quilt I took hundreds of photos of gum tree bark and then bought Kona cotton in over 60 colours, not all of which I used in the end. 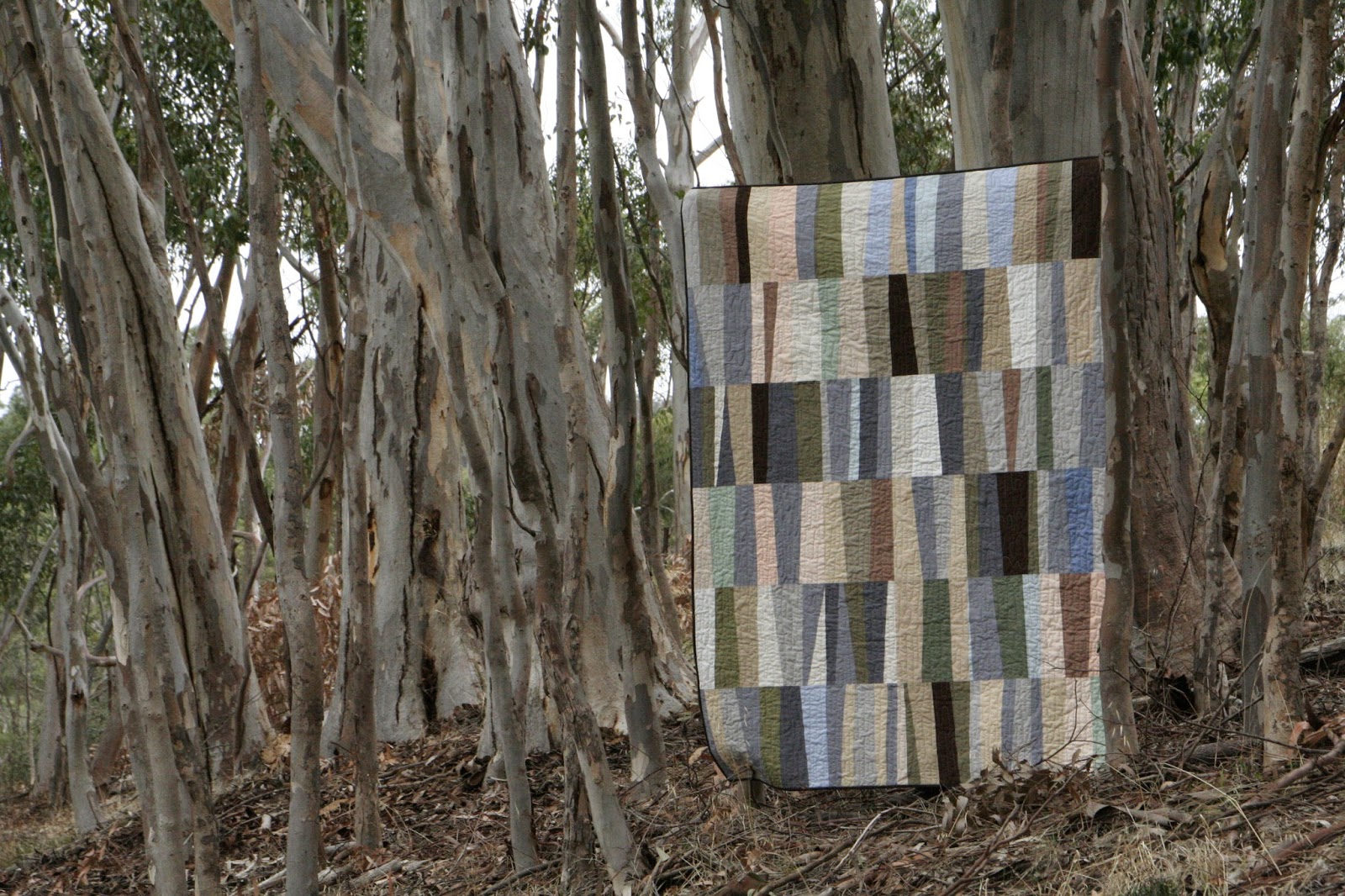 Sometimes the creative process revolves around a stack of fabric, or a key fabric, which I play with improvisationally. For this one the 1960s fabric in the bottom left, which my mum gave me, was the key fabric inspiring these improvisational squares in the aqua ground. 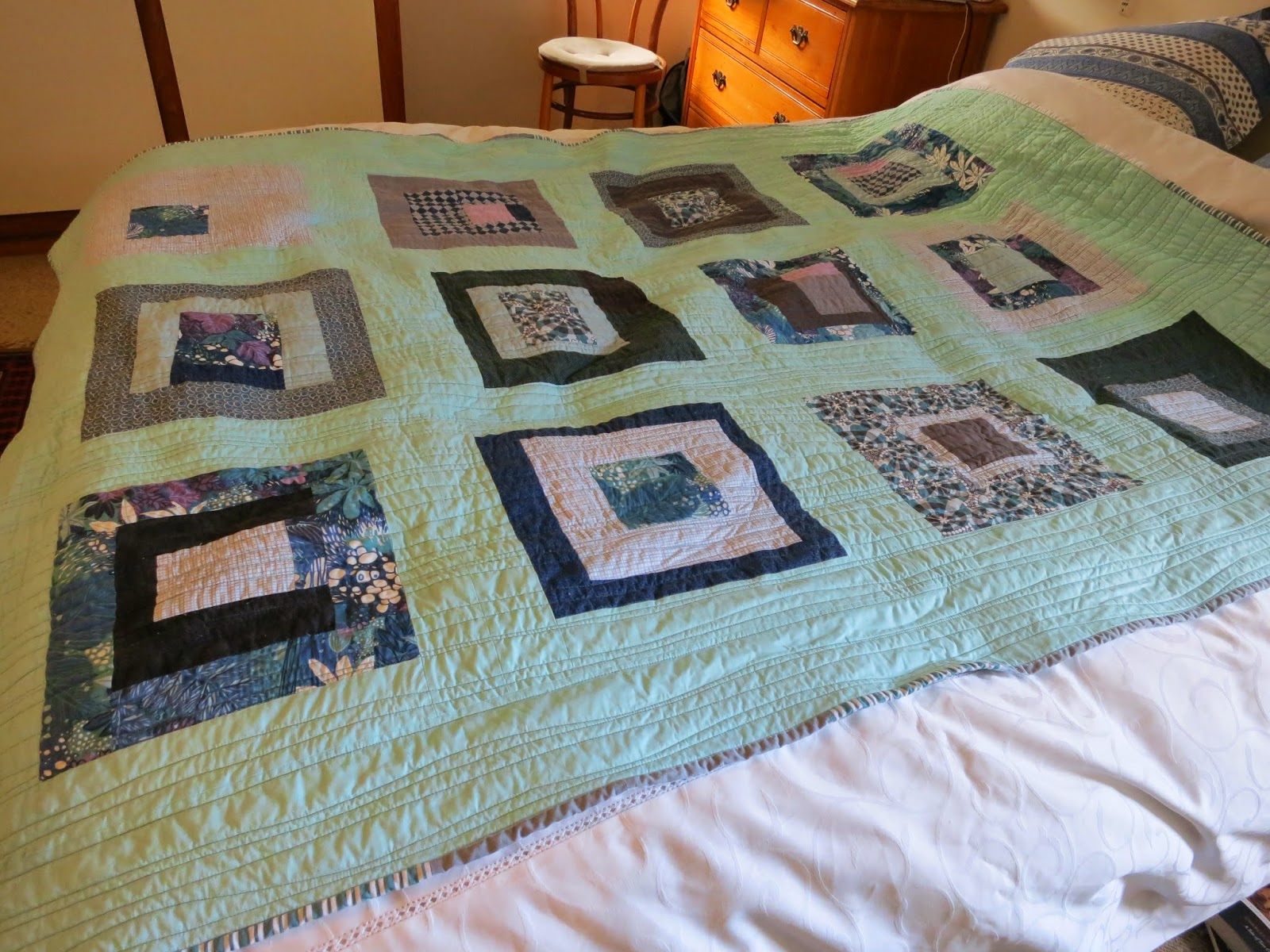 I have a journal in which I draw up ideas; but I'm generally not a detailed planner or quilt maths worker-outerer. So I don't figure out how much fabric I'll need first which sometimes gets me into trouble- or requires creative solutions, or more often- shopping, which puts projects on hold!

Sometimes I need to make a quilt and I start with a pattern and then put together a fabric stack, like this one which was a baby gift. 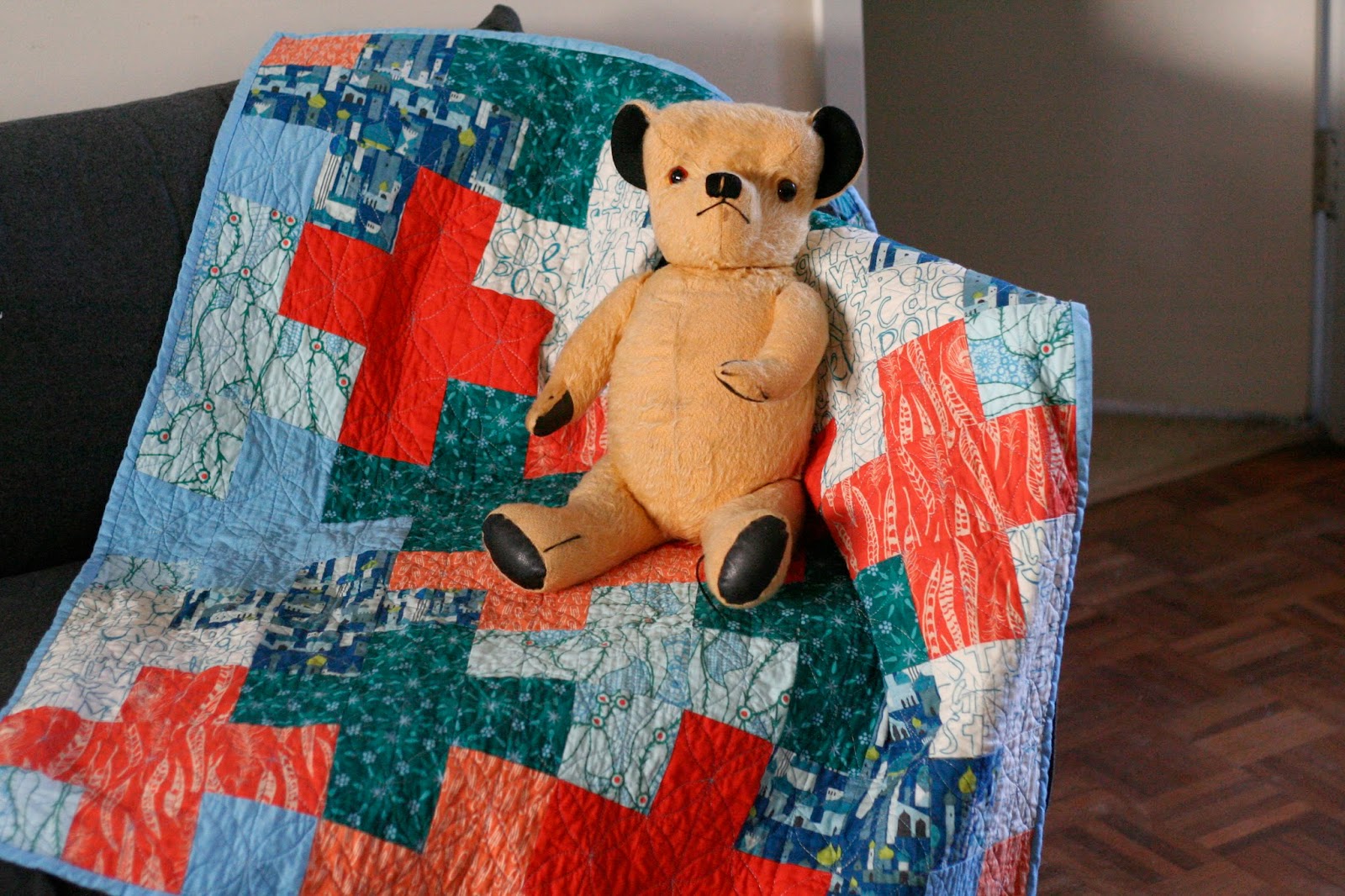 It's great to be a part of a community like this to share ideas and inspiration. I'm having a hard time finding someone who hasn't already done this hop; and like Catherine I feel a bit odd about putting people on the spot in case they don't feel they can decline; but if you're reading this and think- hey I'd love to-let me know in the comments and I'll give you a shout out, or just write a post and let me know so I can get to know you too if I don't already read your blog.
Posted by Camilla at 20:33