Despite this quilt being so simple it has taken me almost a year from first idea to finished article. 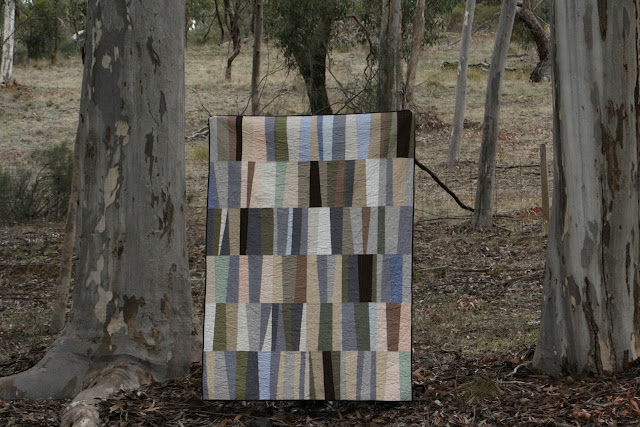 When I was uploading the photos of the finished quilt the other day I noticed that the date on the original inspiration photos of the gum bark was 31st May last year. I have been making other things in between but still...
Overall as my first real attempt at improvisational work I'm happy enough. I once heard a well known quilt artist speaking at a workshop, can't remember who it was, being even before I really got started with this faffling; but I do remember her saying that the best design advice she'd ever been given was: "if you like something, do it again; and if you don't like something, do it again!" And in terms of refining an idea and a skill, that's got to be good advice.  The other thing I remember was her proudly showing a lot of her work, from her very earliest quilts, which she described as ugly; but what was significant to me was her affection for these as part of her learning and her first attempts at conveying an idea in fabric.  That's encouraging! And an approach to self that I'd like to cultivate. It's easy for me to see all the things I don't like in my work and for that to put me off the enjoyment of the process and the play. Do you think about your process, or wrestle with yourself, or is it only me?! 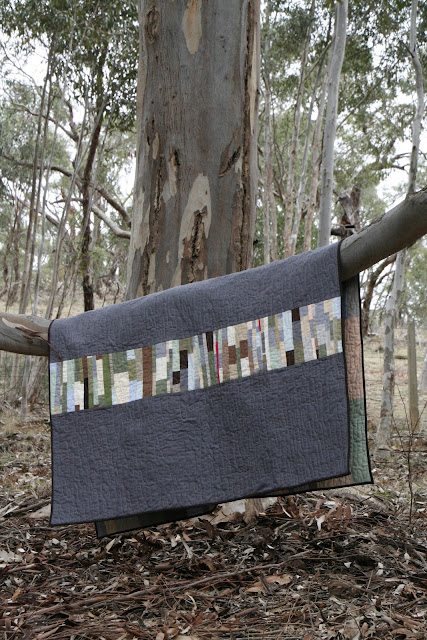 I like the "back" with its tiny strips of Kona Pomegranate, like the tiny hot pink gum flowers on some species of tree and I think I'd like to try this strip of improvisational piecing amidst the grey again in a different project. 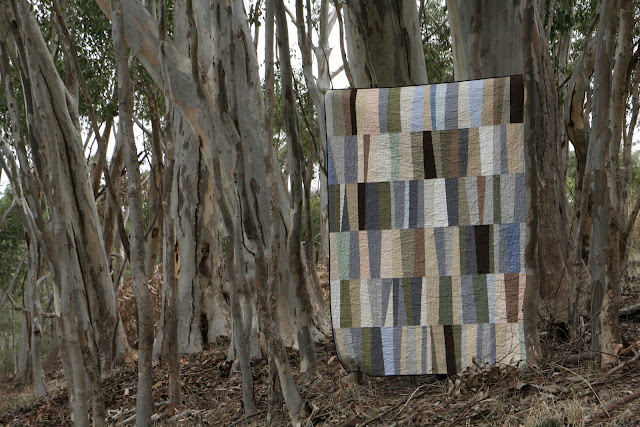 You can see my process was very simple; to cut pieces of fabric a bit bigger than the finished blocks of 19.5 x27 cm (71/2 x 101/2 inches) slash them in to three or four and recombine them 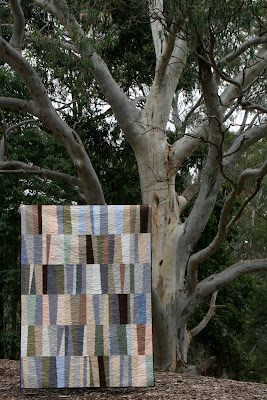 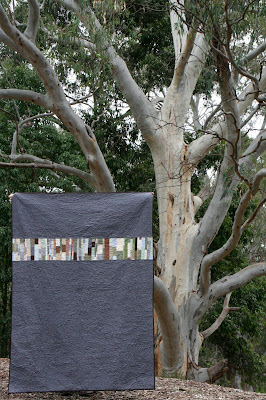 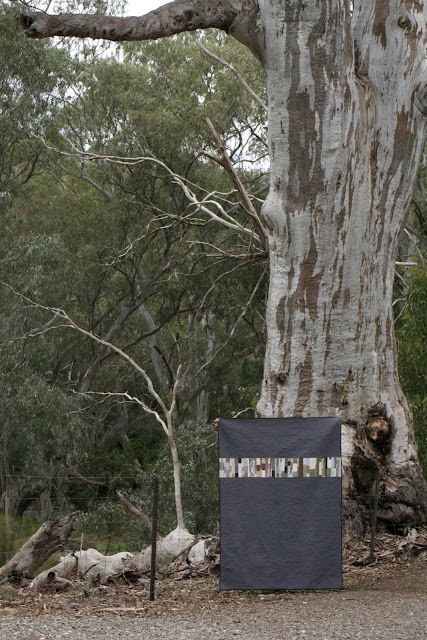 The quilting was decided before I even started, once I'd seen the lovely job Amy did on The Real McCoy. She even has a tutorial of her quilting of this one here; which shows how she manages quilt bulk. Amy's quilting is denser than mine, but the general idea is the same. 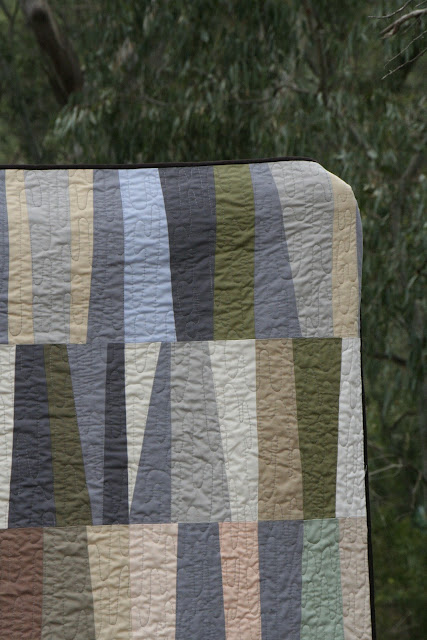 I auditioned several binding possibilities but the Kona Espresso won out. That's the darkest brown I used in the top and in real life it's not quite as dark as it looks in these photos. I wanted a skinny binding, so cut it 2" wide and binding this in the traditional way, sewing the doubled over binding on to the front and hand stitching the back, certainly was skinny, a bit of an effort actually- maybe I'll go for 2.5" next time! 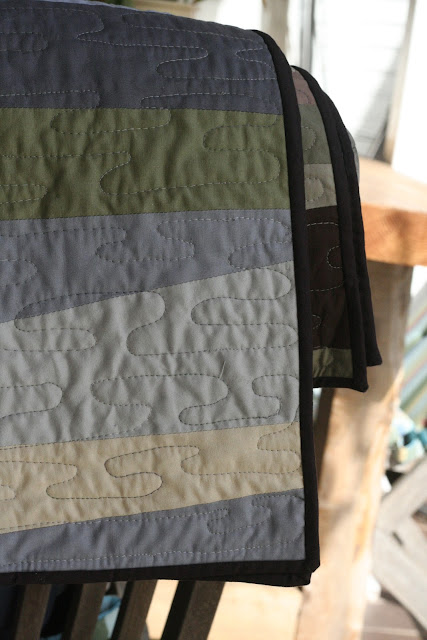 So now that's done, I'm working on an HST quilt with scraps and unused colours ( I bought 60 something and only used 20 something) from this quilt, inspired by this one! 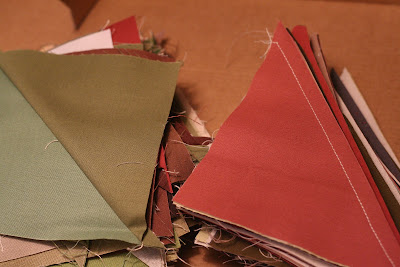 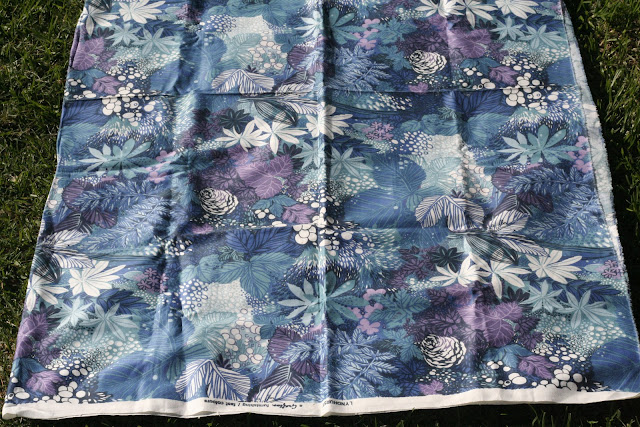 which was languishing for many years in Mum and Dad's kist where Mum keeps her fabric. I love it and she gave it to me years ago, since when it has been languishing in my fabric storage, but its time has come (the walrus said)...!

So I have gathered it some friends, which are sitting together in an inspirational little pile.
What do you think? Does it all look too "medium" to you? Any that don't belong? I'd love to read your comments. 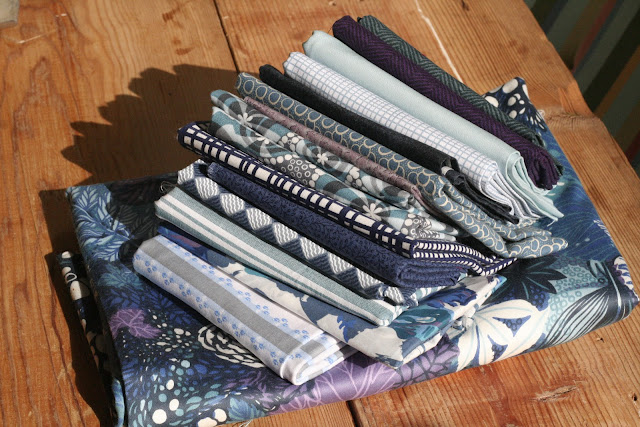