Siem Reap and Angkor Day One and Two

Even though we've been back from Cambodia for 10 days (and it seems much longer) it's still fresh in our minds and I wanted to post about the last stage of our trip. In a way it's hard to know where to start because the temples, which dominated our explorations in this area, are so huge in scale that it's hard to capture with photos and my ineloquent writing.  None the less- here's a taster...

Siem Reap is the town which is the gateway to the Angkor area, which really has to be seen to be grasped. Far more than just an impressive World Heritage site, the construction in this area dominates the region and covers a huge area in square kilometers (haven't done the maths to figure out exactly how much) but did visit Wikipedia to explain that far more than "just" the site of over 1000 temples,
"Angkor had been the largest preindustrial city in the world, with an elaborate system of infrastructure connecting an urban sprawl of at least 1,000 square kilometres (390 sq mi) to the well-known temples at its core".


I had seen an animation at the National Museum in Phnom Penh which showed how the area might have looked, complete with busy little people, at the height of the Khmer Empire, of which this area was the seat from the 9th -15th Centuries, and this really helped as we  cycled around the area. It helped me to think that as the Greek or Roman Empire is to Europe, so the Khmer Empire was to Asia in terms of impact.


Initially we were a bit stumped as to how to shape our itinerary as there is so much to see and we didn't want to get "templed out". With the help of The Lonely Planet Encounter guidebook we decided to hire bikes and go at our own pace. We had 4 or 5 days and wanted not to cram in too much, especially since it was around late 30s early 40 deg temps and humid!

On the first day we hired bikes and cycled out to Angkor Thom, the big walled city north of the enormous temple of Angkor Wat. (We tried not to look at Angkor Wat as we went past, coz we were saving it for later!) We pottered along slowly on our bikes and it took us about 1/2 hr from our hotel in Siem Reap. Our goal today was to get a bit of an overview and to visit a few temples, to give us an idea how to plan our time on the other days. What impressed me to begin with was the parklike country feeling of the setting. There was even shade on our ride out! 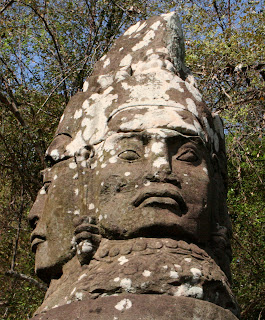 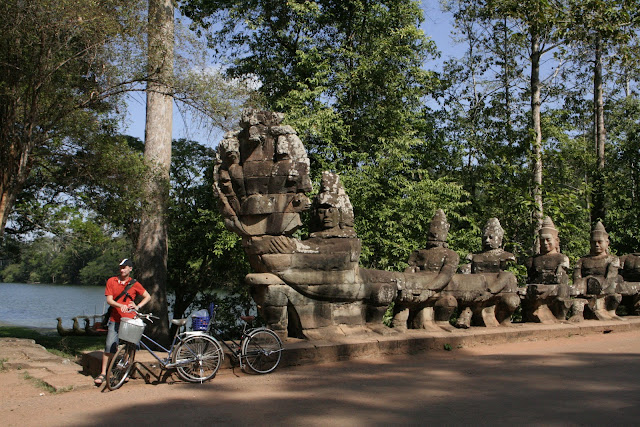 Inside the gateway are several temples, the ruins of the Royal Palace, a couple of terraces for the public viewing of ceremonies and lots of pools and walkways. We got a little taster of the bizarre Bayon

which, as the guide book observed, looks like a glorified pile of rubble from a distance, but actually has an incredible 54 towers, each with 4 gargantuan faces of the self-proclaimed god-king Jayavarman VII. That makes -yes! 216 faces. We planned to come back for a closer look later!


After exploring Baphuon we cycled on, past the Terrace of Elephants out through the North gate of Angkor Thom to the large complex of Preah Khan which may have been J VIIs temporary residence while Angkor Thom was being built. 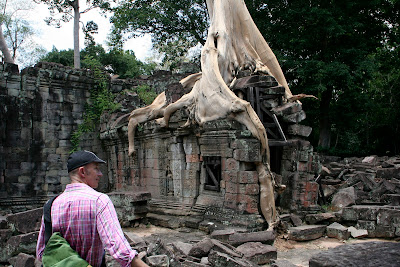 Cycling back into Angkor Thom via the North Gate 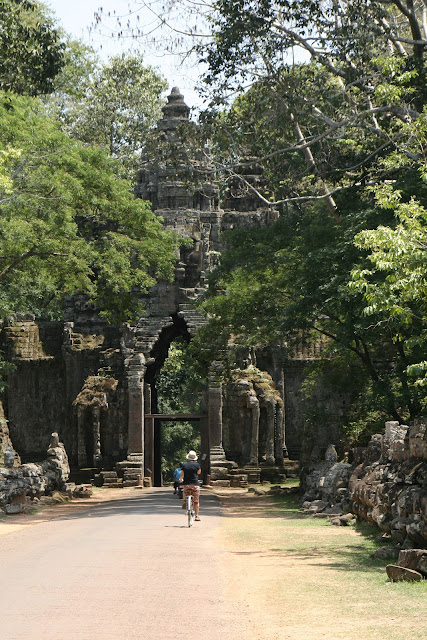 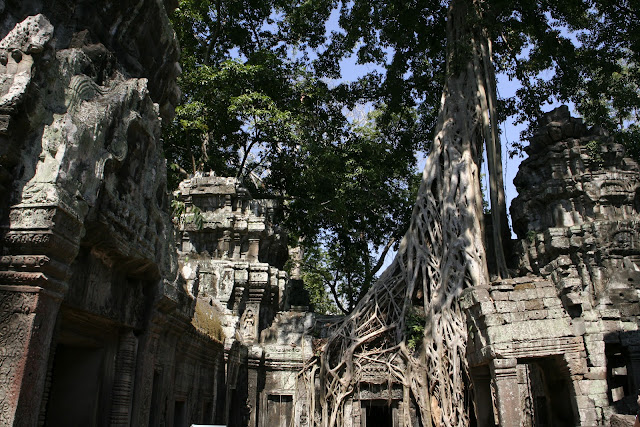 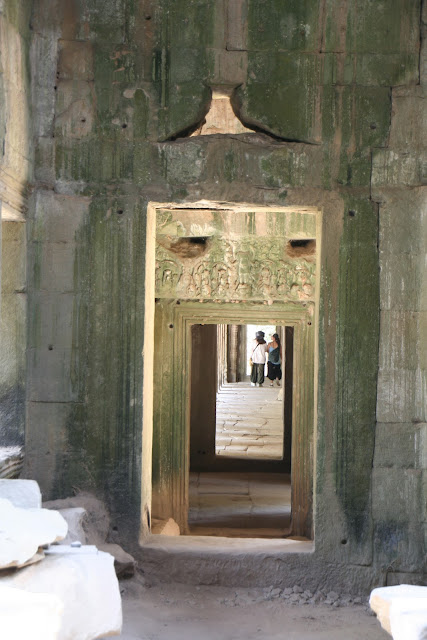 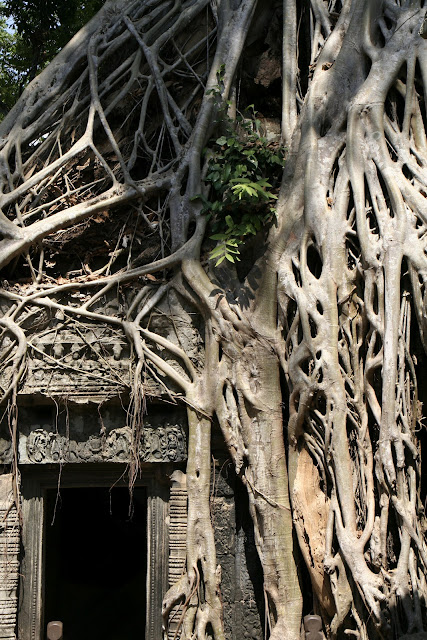 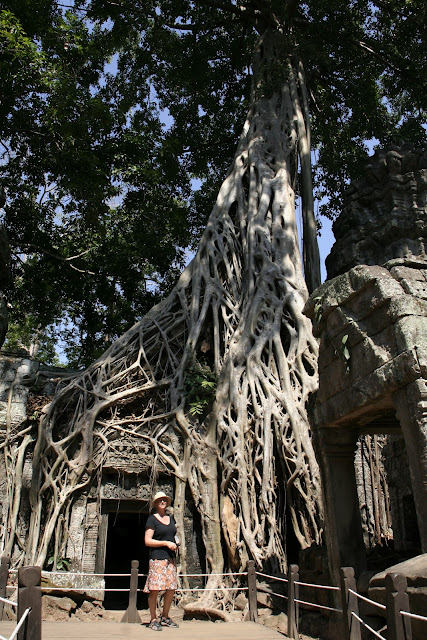 And that was enough for Day One! We probably cycled, well pottered, about 30km and it was a great way to see things, just the right pace and even at our leisurely pace there was some apparent wind to cool us a little.

On Day Two we decided to go back in time and visit the earliest group of temples in the area- the Roulos Group, about 13km East of Siem Reap. Roulos was Indravarman I's capital (887-889). Mounted on our trusty steeds once again, we very slowly meandered our way, via a pottery re-creating Khmer art from the Empire; 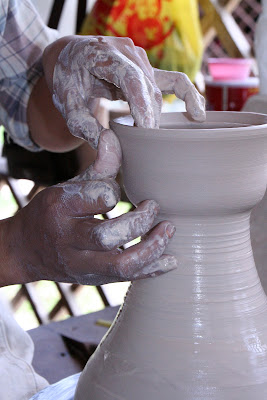 to Bakong, the largest of this group. 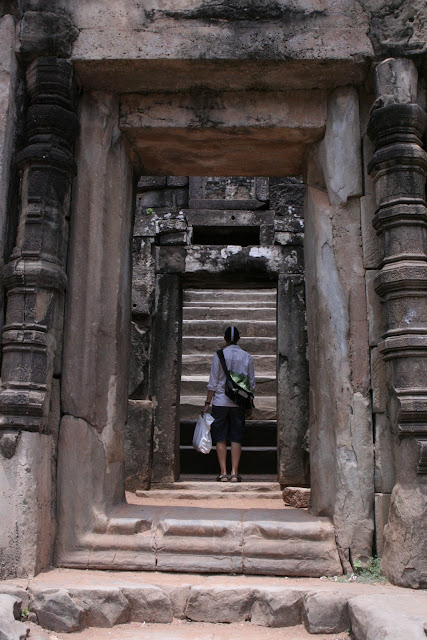 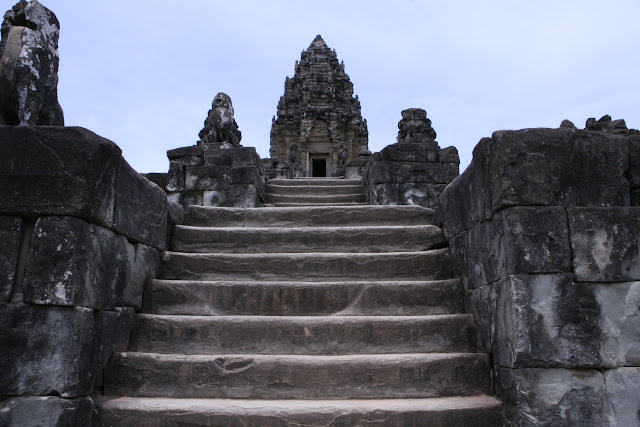 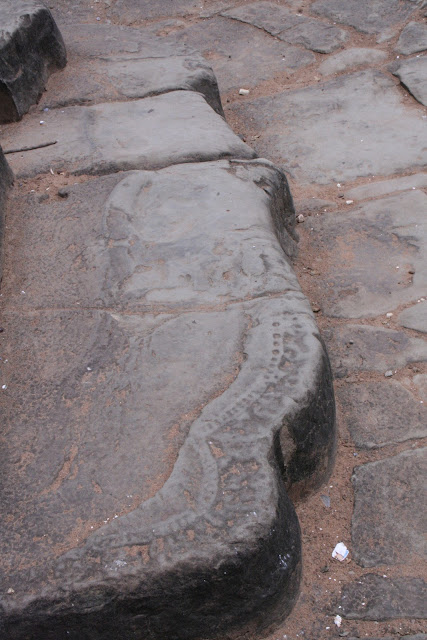 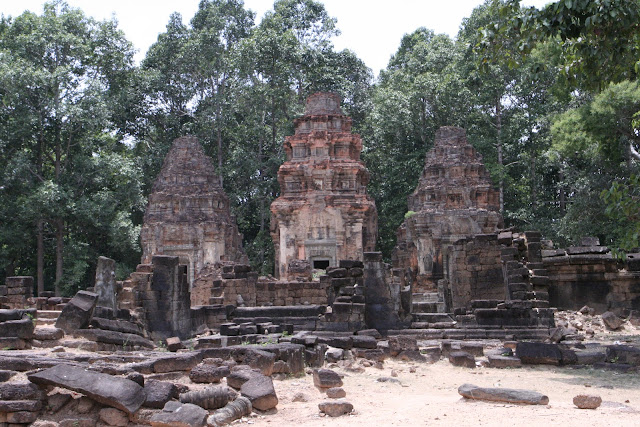 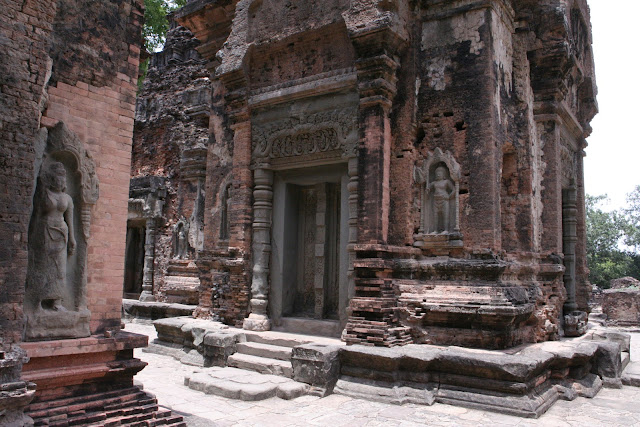 and has some amazing plasterwork, currently being restored 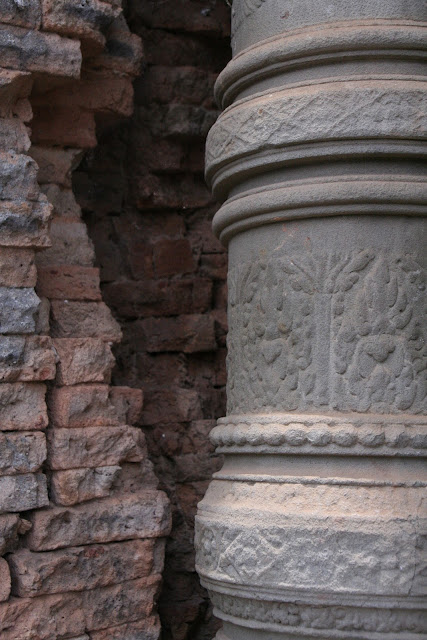 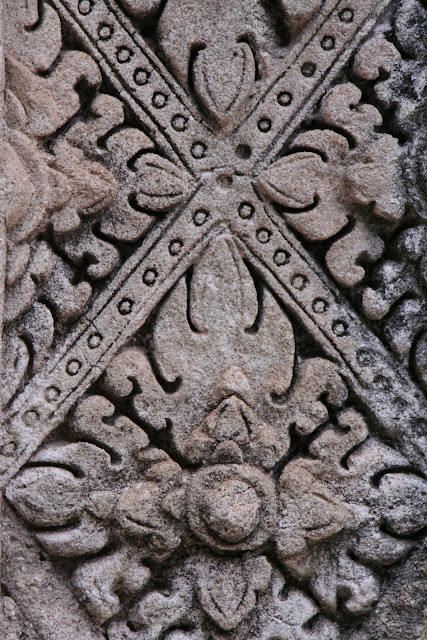 Two of the temples in this area have active Buddhist monasteries 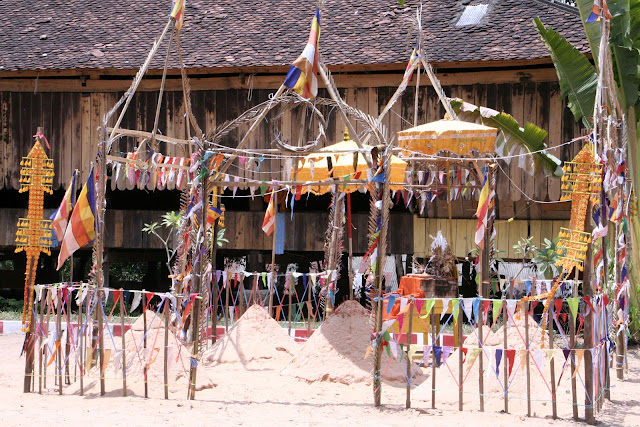