A Bee and a Garden

I've joined one, which will be my first ever. I read about it on Wellingtonian Adrianne's blog. I think I maybe a bit mad, given the number of things I want to do next year, but it'll be fun. I've signed up for the Australasian bee (but there are also ones for other continents including the UK), which means postage won't bankrupt me and it's for solid fabric which will be great as I'm always drawn to solids. I think we only need a couple more in the group, so if you're keen you can read more about it here.

And then the Garden

My initial confidence with my courgettes seems to have been misplaced as they really aren't thriving. I don't know what I'm doing or not doing but the flowers have all come to nothing and the leaves don't look happy so predicted gluts seem impossible. 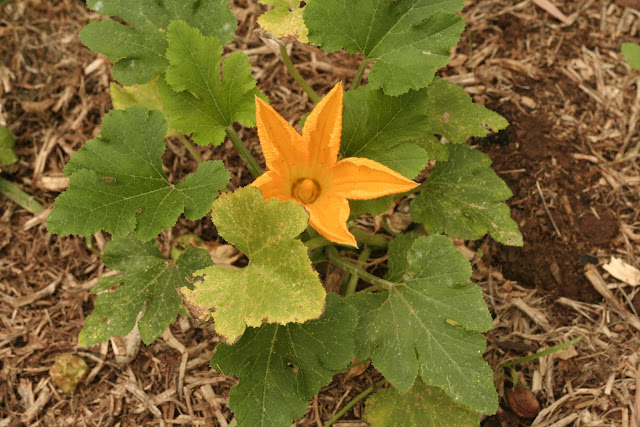 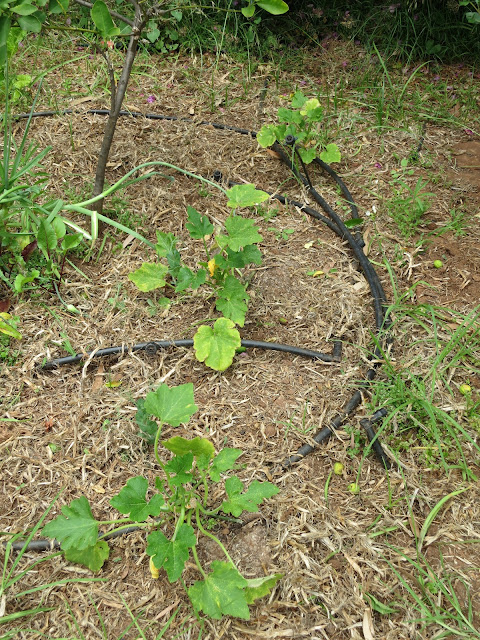 My friend Liz is not only a sewer, but also a gardener and tho' she says veges aren't her area of expertise, she was not full of optimism about my courgettes either. Possibly the large tree next door, or the small lime tree in the middle of the vege patch are taking the nutrients, or it's not sunny enough? Whatever... things have never thrived there despite our best efforts. So...

Liz and my youngest son and I laboured away last Friday in the heaviest rain we've seen all year and built a new garden. We've sited it at the back in a spot which gets at least 6 hours of sun a day, except the other day! 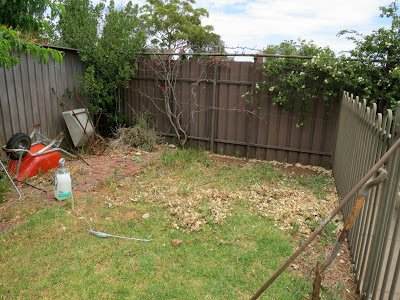 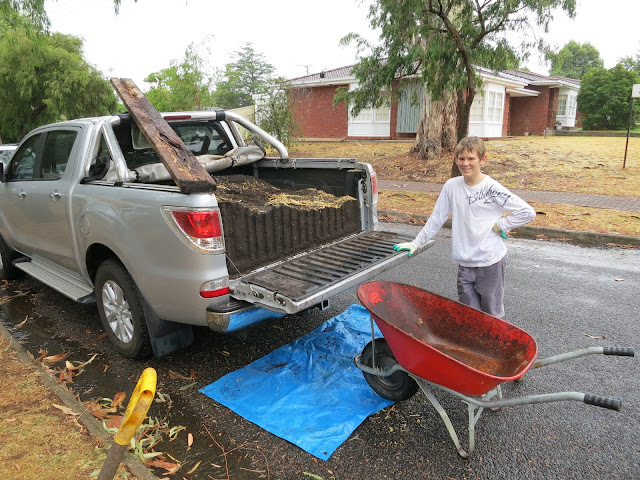 It was wonderful to have the use of Liz's dad's ute to collect the supplies to build this garden as the rain poured down.

I was buoyed by Liz's confidence and enthusiasm for the whole project. And Alfred was a tireless worker, seeing the project through. 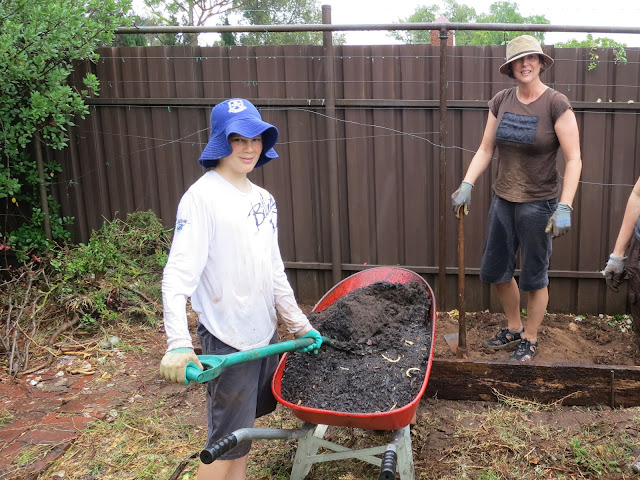 I've cropped you out of the pics Liz, since I didn't have your permission to post you to the world in drowned rat format! 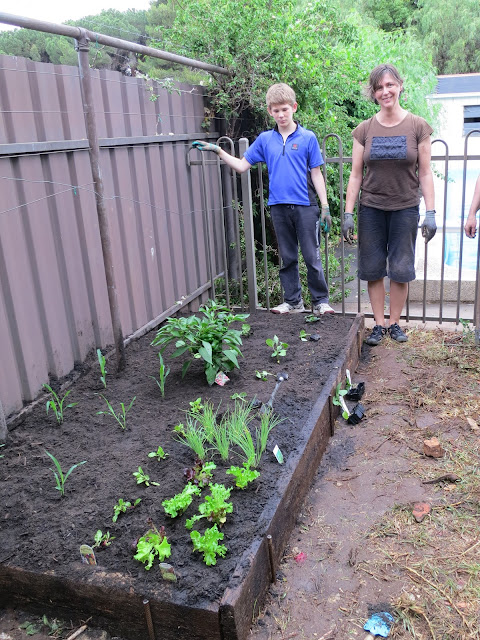 We've planted corn, silver beet, lettuces, spring onions, capsicum, aubergine(eggplant) lebanese cucumber and courgettes and two sorts of beans. We can grow the beans up the fence, they've sprouted, so roll on bean glut!  We've mulched and watered and will do our best to look after it, but I am doubtful given my past lack of success on the garden front. But Liz reckons it'll be great...!

A finish- finally and some fabulous fabric

I have finally finished off my table runner!  I was feeling indecisive about making a facing, but ended up deciding a binding would finish off the stripes, rather than leaving them hanging. Tho' I did like the wine red idea, suggested in the comments on my last post, I'm a sucker for green and happened to have enough on hand. So green binding it was. 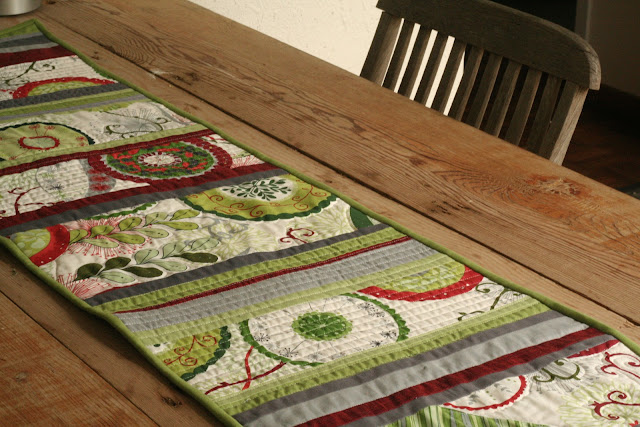 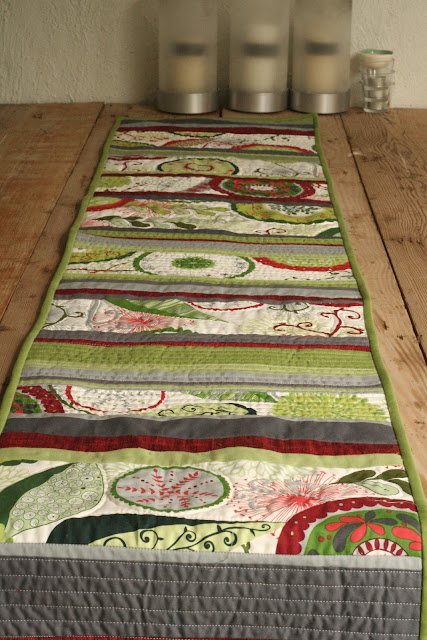 I absolutely love this Wrenly pattern with its greens and small and large detailing . The red spiky flowers like the one below towards the right totally remind me of the Pohutukawa and rata flowers from home in NZ which flower around Christmas near the beaches. I decided to quilt some of the patterned areas with some free motion outline quilting. Not only because I was sick of doing short stripes! 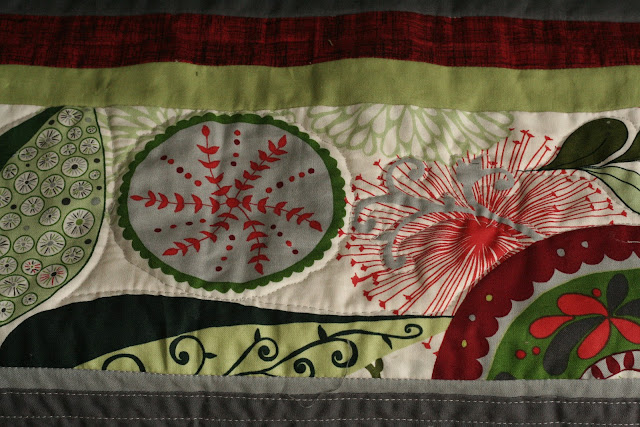 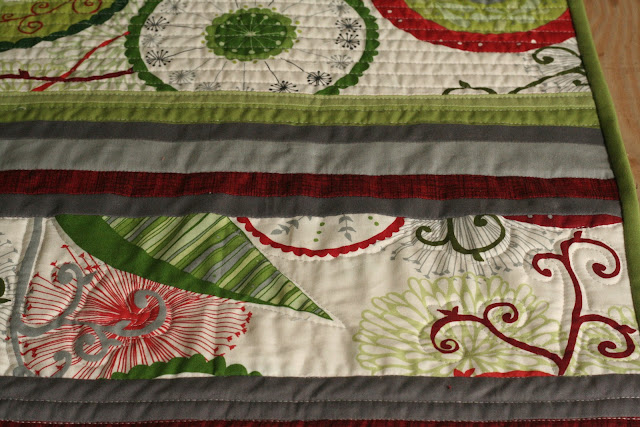 I deliberately didn't make the striped piecing ruler straight, but am not entirely sure about the quilted stripes accentuating that. I might make a different decision next time, but overall I'm pleased and think it's happily Christmassy without having to be hidden away for 11 months of the year. 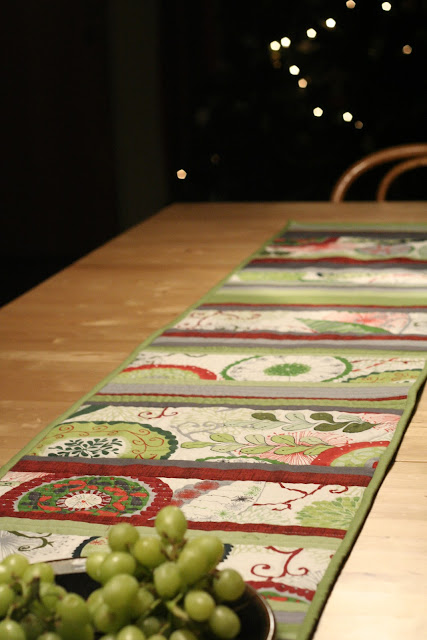 In other news...we have been receiving various exciting packages to put under the tree and for our younger son who turns 14 on Sunday; but one came today which I could open already! 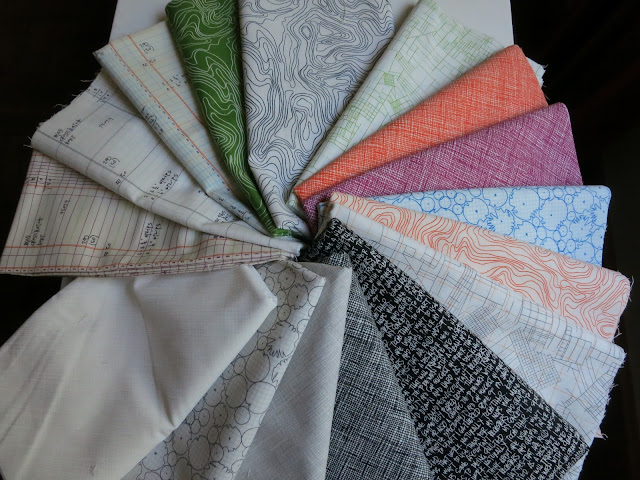 I have really fallen for Carolyn Friedlander's Architextures range. Believe it or not I did exercise some restraint and there were a few I didn't get, but I've always loved maps, so these were irresistible!
I'd love to make a bag, but they'd also make great little pouches, cushions and some are destined for my low volume text/ crosses quilt. 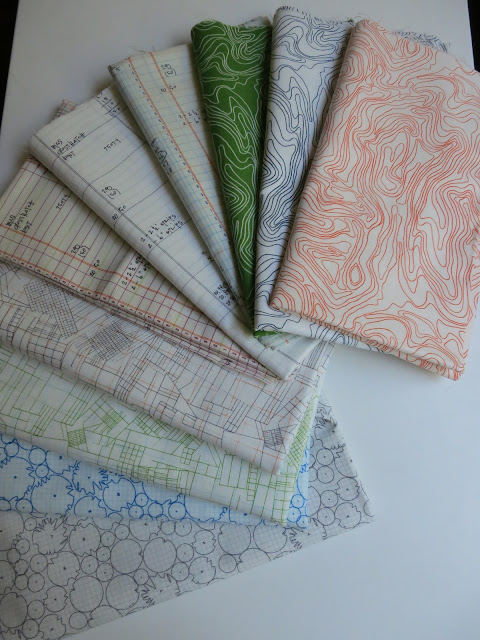 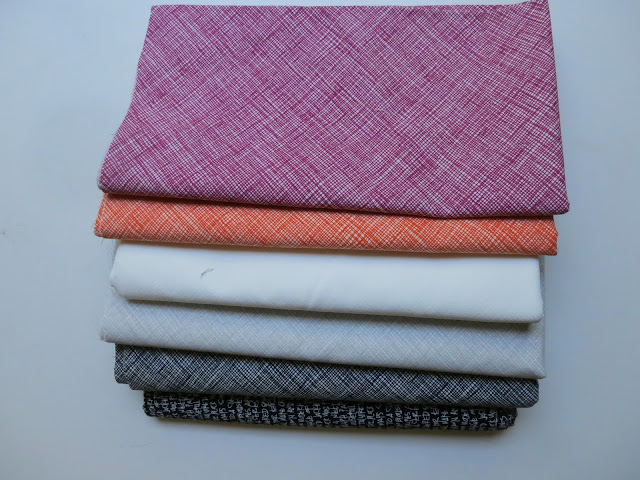 The white on white  is hard to photograph with the others and reflects the light quite trickily, but I think these will be great blenders, as well as stunning on their own. The cross hatch on the bias is a nice change. As is becoming my standard, I got 1/2 a yard of each, but a yard of the black and white as I have a project in mind for the future. 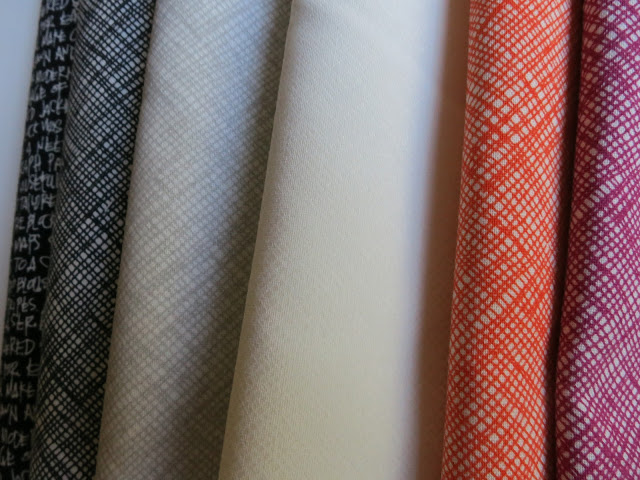 Joining in at My Creative Space today

Despite not having a lot of time for sewing recently, I did finally get my courage up to cut into the Valori Wells and have managed to make the top and back and get them basted. The whole process is SOOO much quicker than a quilt, it probably took me 5 minutes to pin baste, if that. 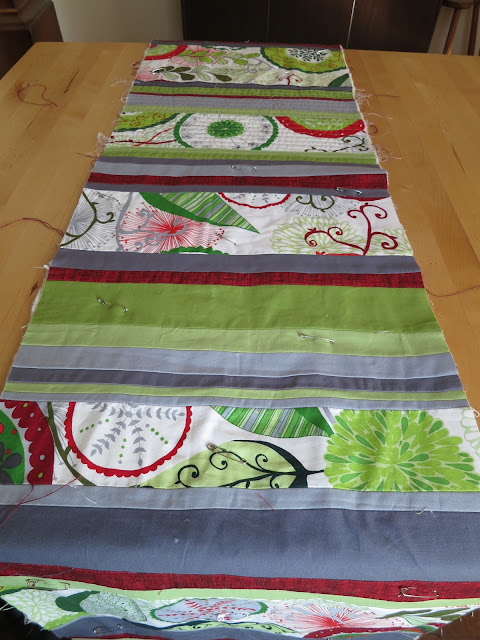 I did consider spray basting but thought of my lungs and, only having done it once before years ago, did wonder how much give there is if the layers stick down too soon?...Can you lift it up and re-place it? Would it work with such a long piece? (It measures 205cm or 80 3/4") I've been a faithful pin baster to date, but would love to know how you find spray basting, if you do and the hows, whys and wherefores. 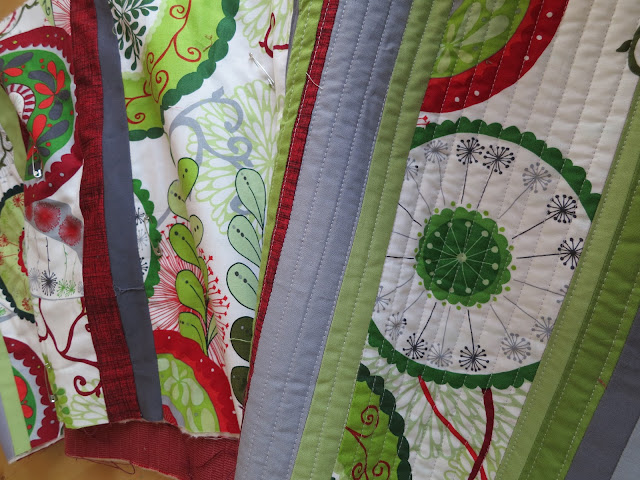 I've decided to straight-line quilt it across the width, but I must say it's tedious to do...There's a lot left to go... I'm using a light gray Aurifil. I've read a lot about this thread- seems good so far. I let you know how I get on. I'm hoping to finish it this week and meanwhile debating about a binding, and if so what colour? I'm a bit of a sucker for green; or alternatively doing a facing like this. Let me know what you think. 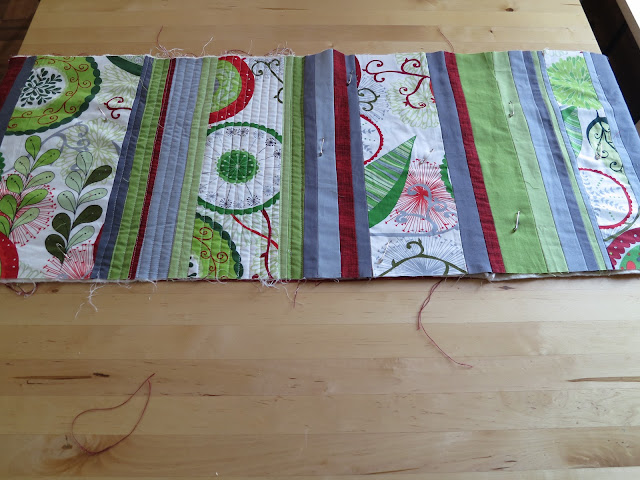 Also I thought I'd show you what my friend Liz has been doing. She made me the lovely black needle case for my birthday and lately she's been busy making one for my daughter and finally, one for herself.
Nice use for her vintage button collection too, though she may just have enough to make a few hundred more! The process of making these is very exacting in terms of getting everything straight. 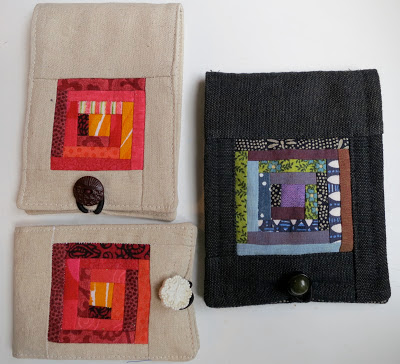 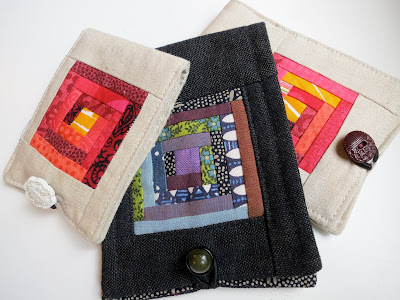