With the New Year we have a new theme for our Four in Art group.
The theme for the year is Light, which provides a host of exciting possibilities. The sub theme that Catherine has selected for this first quarter is Shimmer.

I have been lucky to have been out in my kayak a bit over the last quarter. In November last year, just after the theme was announced, I had a great trip with my Dad and (then) 17 year old son on Lake Monowai over in Fiordland in the deep south of NZ. Only about three hours drive from home, but a world away too. 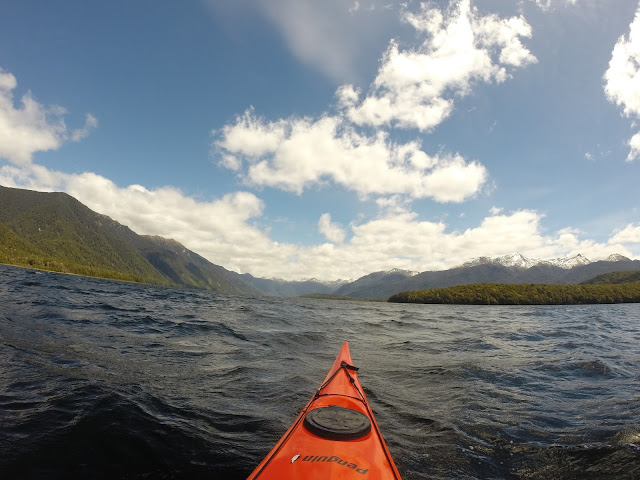 We had some pretty strong winds when we set out, and there wasn't much shimmer on the surface of the water- more white horses and we were mostly concentrating on not going backwards! And there are no photos of that as we were far too busy keeping going forwards to record the effect of wind on water!  But on setting out from the hut the next day it was calm again and over the next couple of days we had plenty of opportunity to enjoy the patterns on the surface of the water and I was thinking that it really fitted my personal definition of shimmer. But had to look it up when I got home to be sure. The definition I found is:

a subdued, tremulous light or gleam. 4. a quivering or vibrating motion or image as produced by reflecting faint light or heat waves.

This effect is really pronounced on water. It was the effect on calm water that I really hoped to capture.

The colours and patterns vary depending on light and reflections 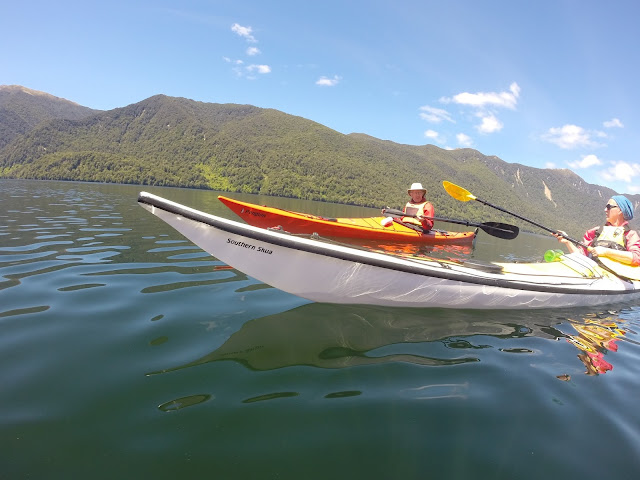 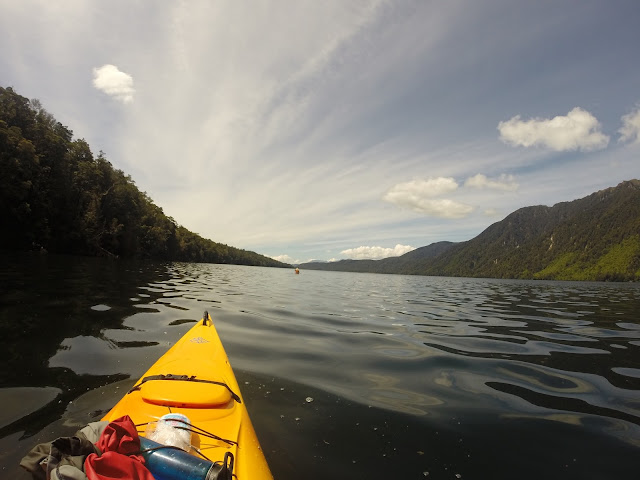 Those loopy patterns of dark and light shown here on the right hand side of the image are particularly captivating in the shimmer department I feel. 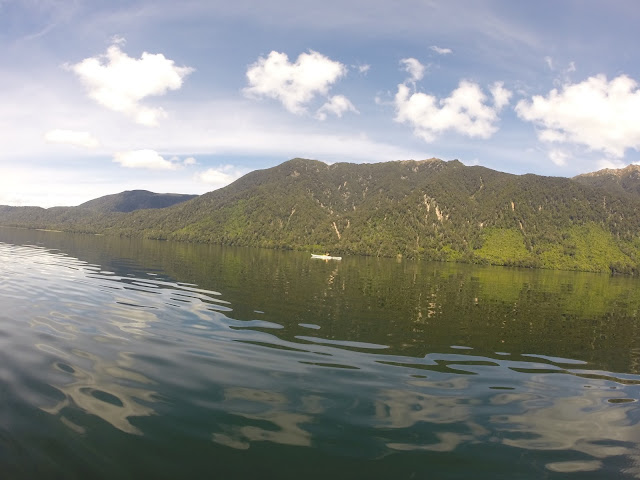 But how to do it? In the back of my mind I think, was the work of Pauline Burbridge who has experimented with shimmering on water, much more articulately than me, but hey you've got to start somewhere!

So I projected a photo on to the wall and because I can't really draw to save myself, I traced  that to cut shapes out of freezer paper that I then ironed onto shot cottons in four shades and fused and layered them onto a background. 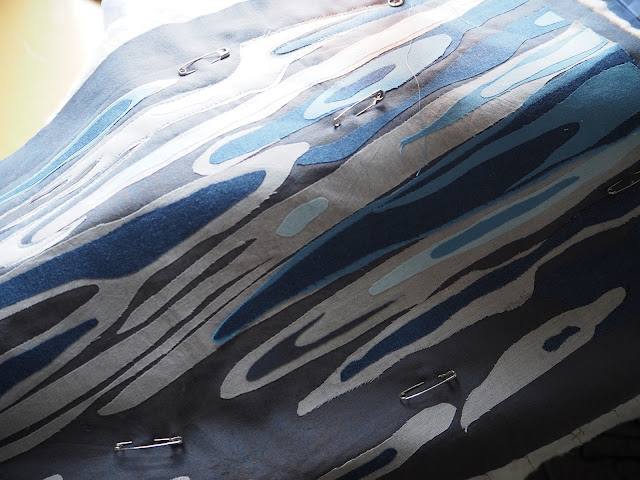 Always nerve wracking to begin to add stitching when I'm fairly happy with the progress so far! And the raw edges are a challenge... 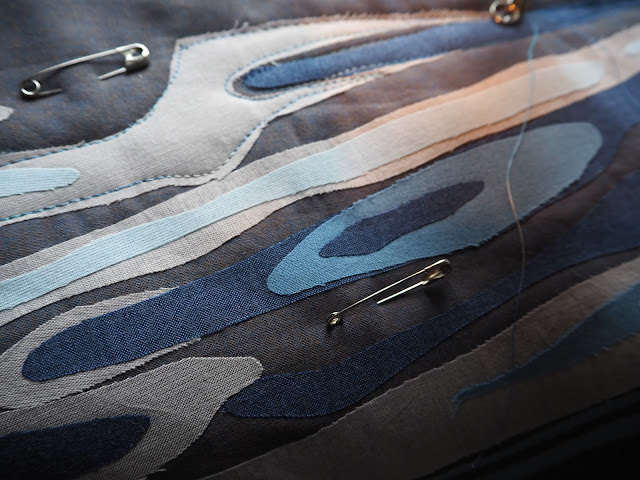 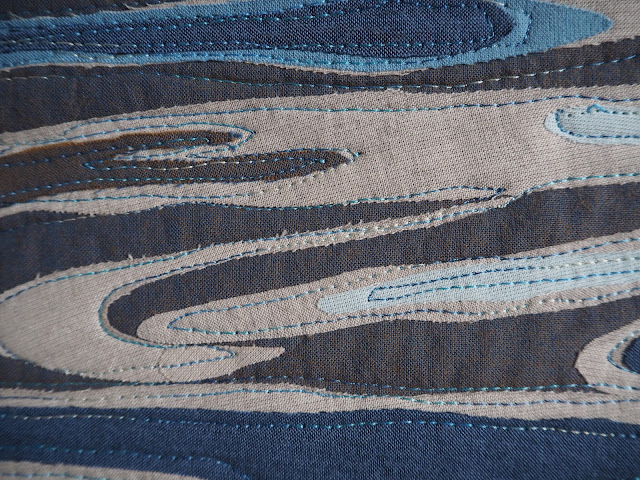 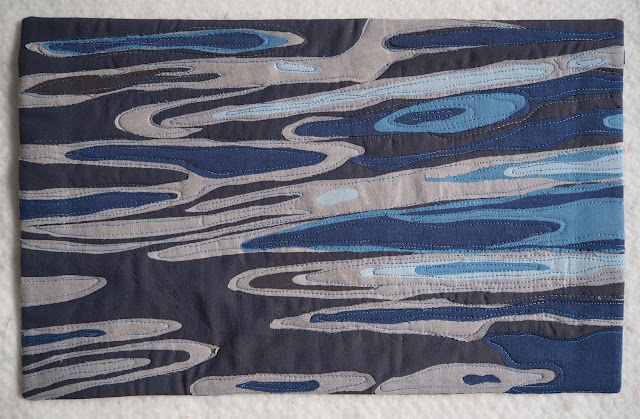 Nowhere near as pretty as the real thing, but I'm happy to have had a go at capturing it.

Next quarter the sub theme, which I've selected this time, is Light in the Darkness which should give everyone plenty of scope. That's due to be finished on the 1st May.


Betty at a Flickr site
Catherine  at Knotted Cotton
Elizabeth at opquilt.com
Janine at Rainbowhare
Nancy at  Patchwork Breeze
Rachel at The Life of Riley
Simone at Quiltalicious
Susan at PatchworknPlay
Posted by Camilla at 22:47 7 comments: