While I'm not getting on very well with my first quarter finishes...!
I have managed to make a few things for gifts for January and February birthdays amongst friends and family:

Firstly  a bag and zippy pouch for my dear friend Liz who was celebrating a special birthday.
When we lived in Adelaide I used to get together weekly with Liz  to sew (ostensibly at least) and I miss her so much. We speak regularly but there's nothing like being present with someone. So while I was making these she was especially in my mind. 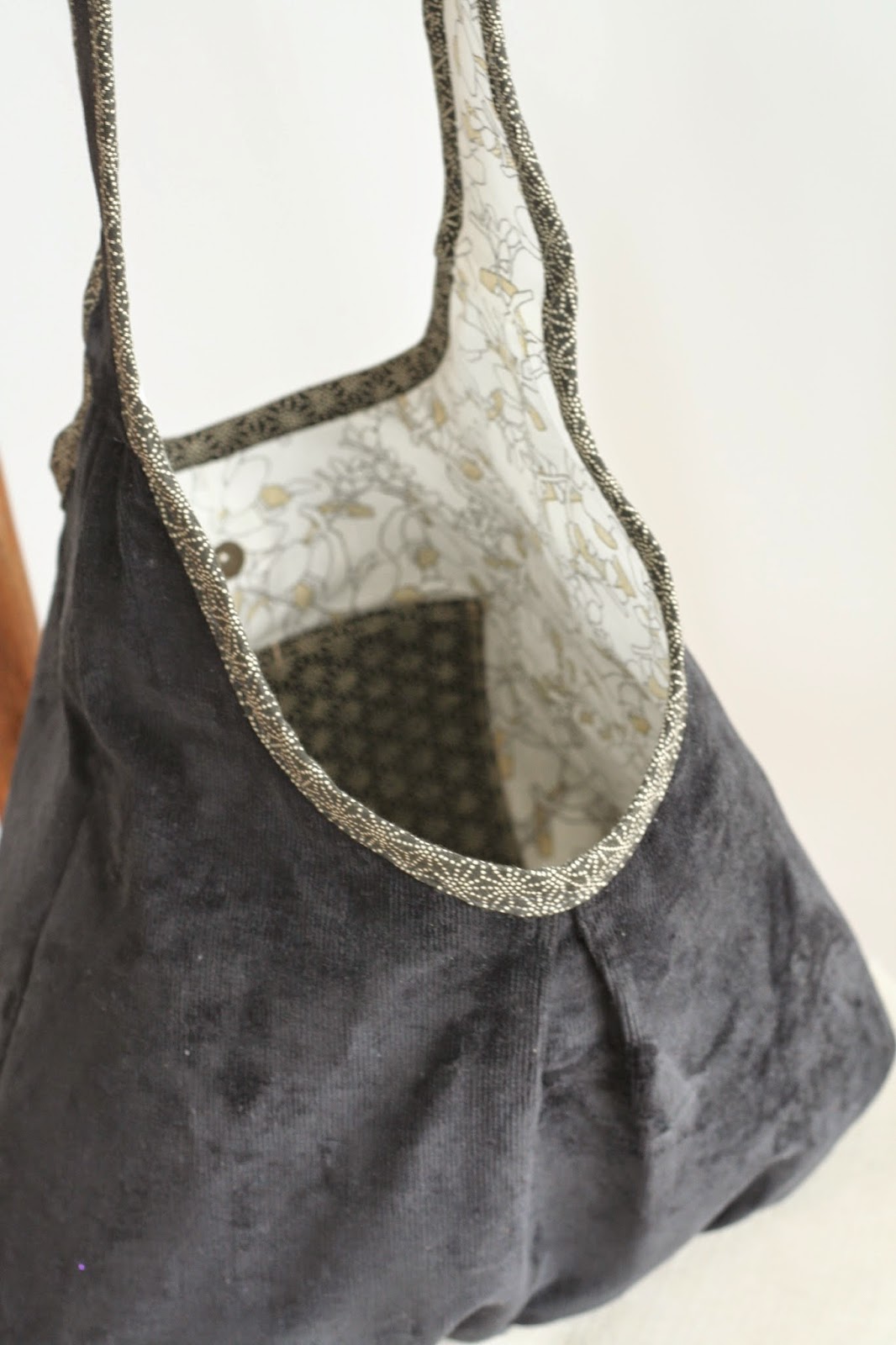 I used the Runaround Bag pattern from Anna of Noodlehead. For the outside of the bag I used a black needlecord, which is hard to photograph!) 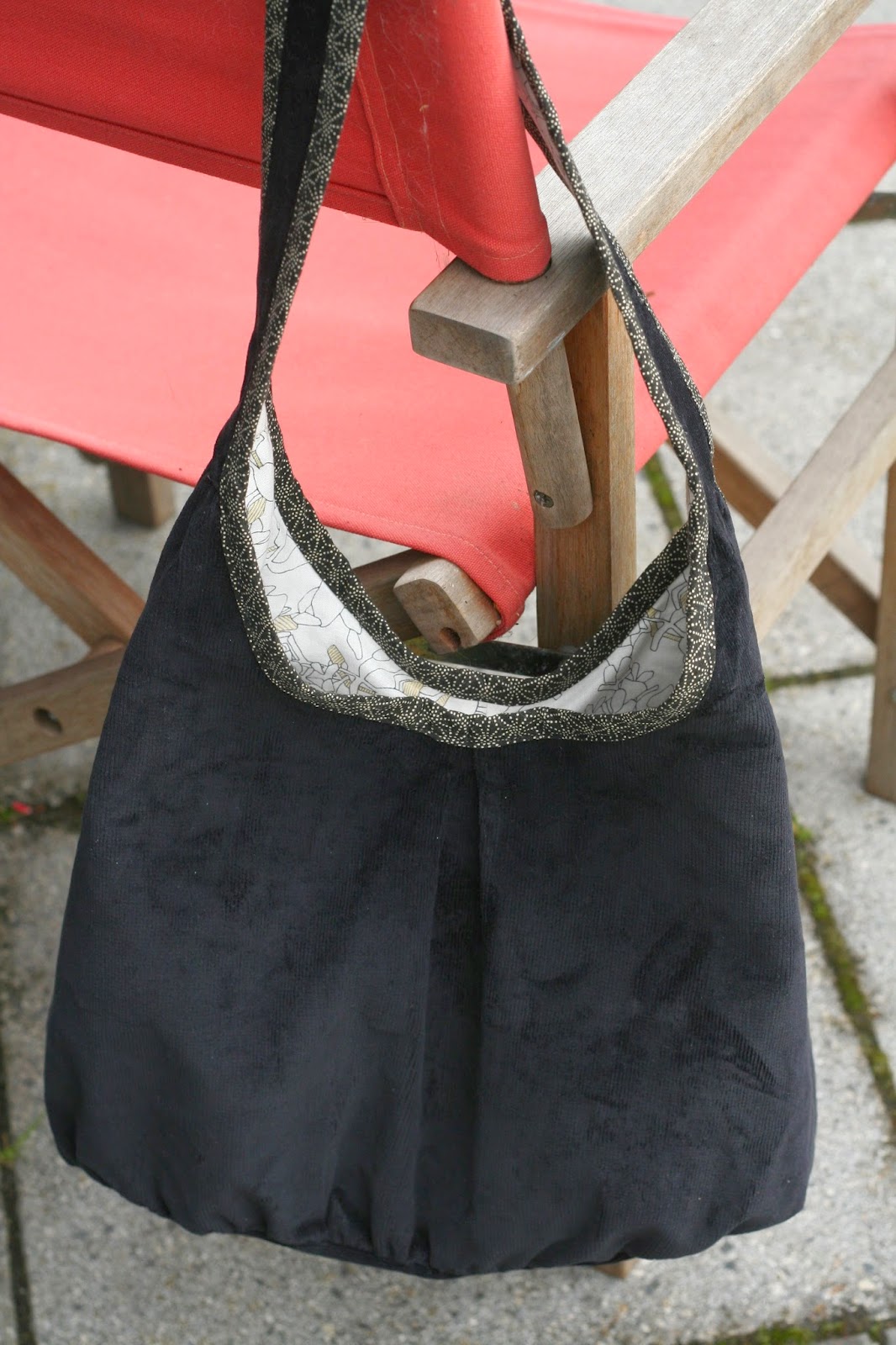 I added a magnetic snap to contain the knitting or whatever and decided on both a zipped internal pocket and a divided slip pocket to keep necessary items handy and secure. 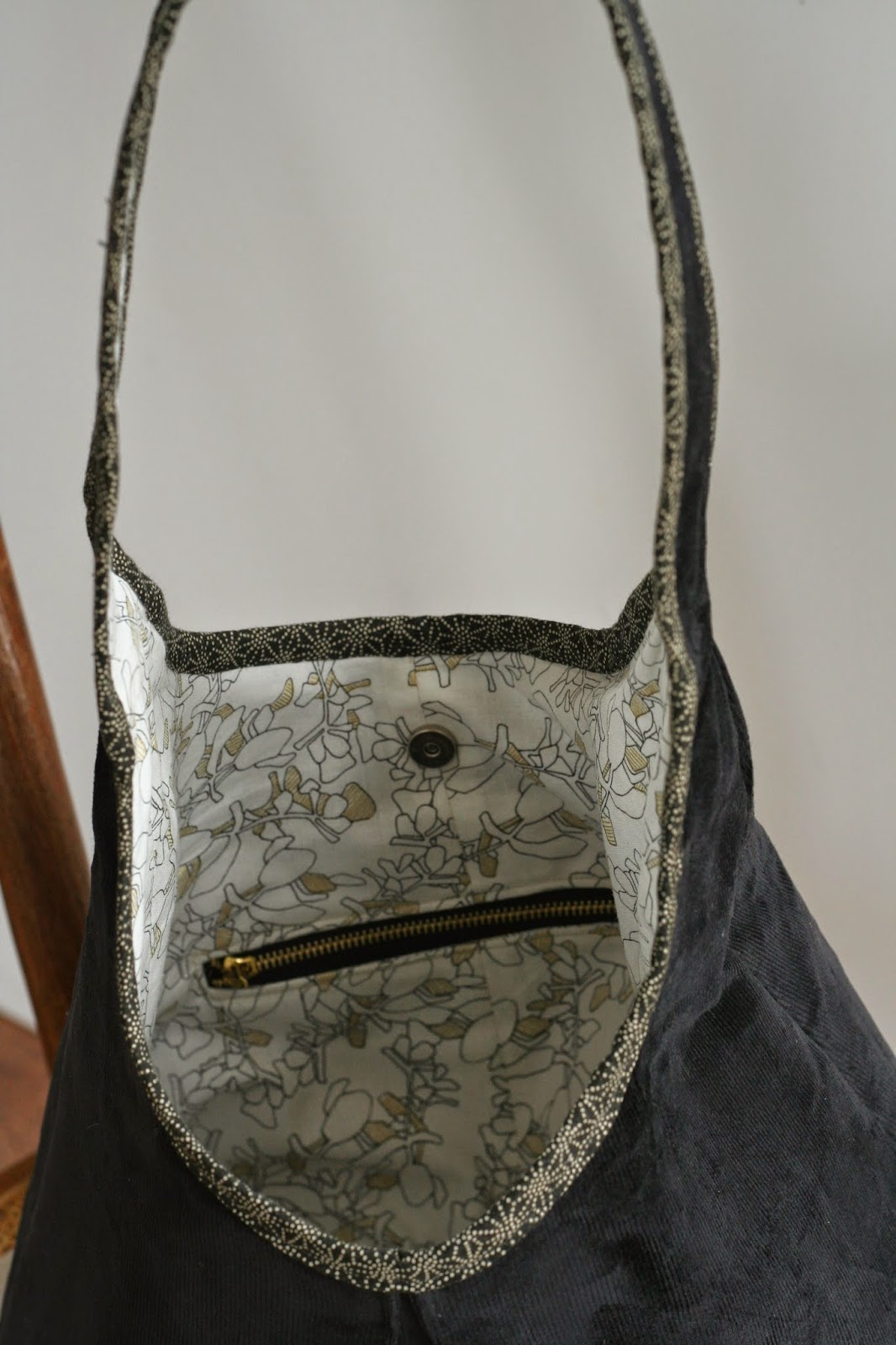 The lining is from Carolyn Friedlander's  Botanics collection. 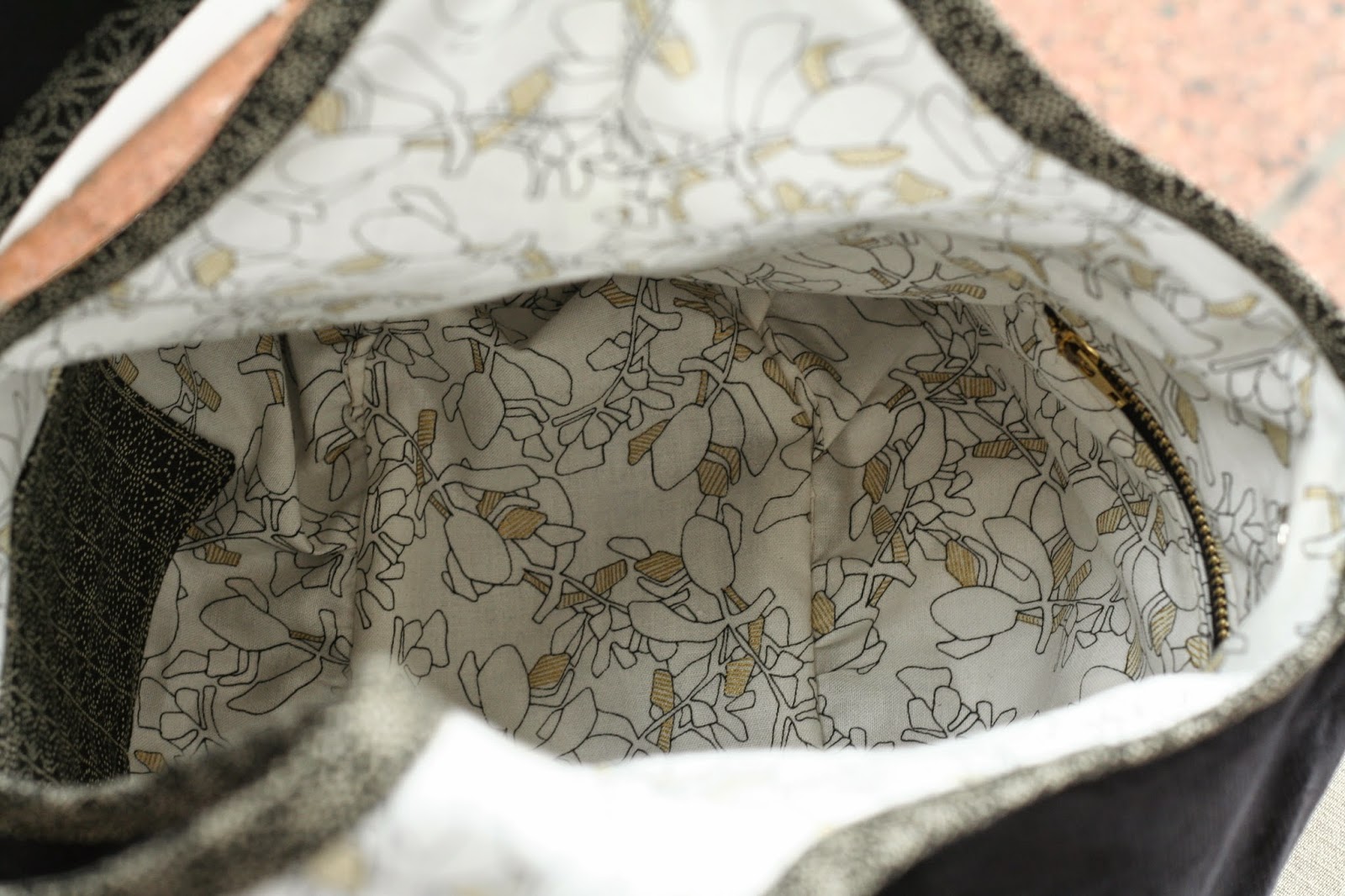 There are a couple of things that were tricky with this. One is finding which interfacing to use. Here in NZ I haven't been able to find the Pellon SF101 interfacing specified in the pattern and have struggled even to find what is equivalent. I wonder whether the one I opted for was too stiff. Any info from Antipodean or non-US readers about this would be gratefully received. If I made this bag again I'd fuse the interfacing to the lining instead of the outer fabric, which might make the bag feel a little softer while retaining its structure.

The other thing, which I'll say a bit more about in a minute is that the piece I had for the lining wasn't quite the dimensions specified so I had to piece it. I've realised often my projects take a bit longer than they should because I have to fiddle about like this so I've made a new resolution about the way I buy fabric...

The zippy pouch is a little extra because Liz had mentioned how much she loved this soft floral lawn I was cutting up from one of my husband's shirts which had gone at the collar and cuffs to use in the shirt quilt. 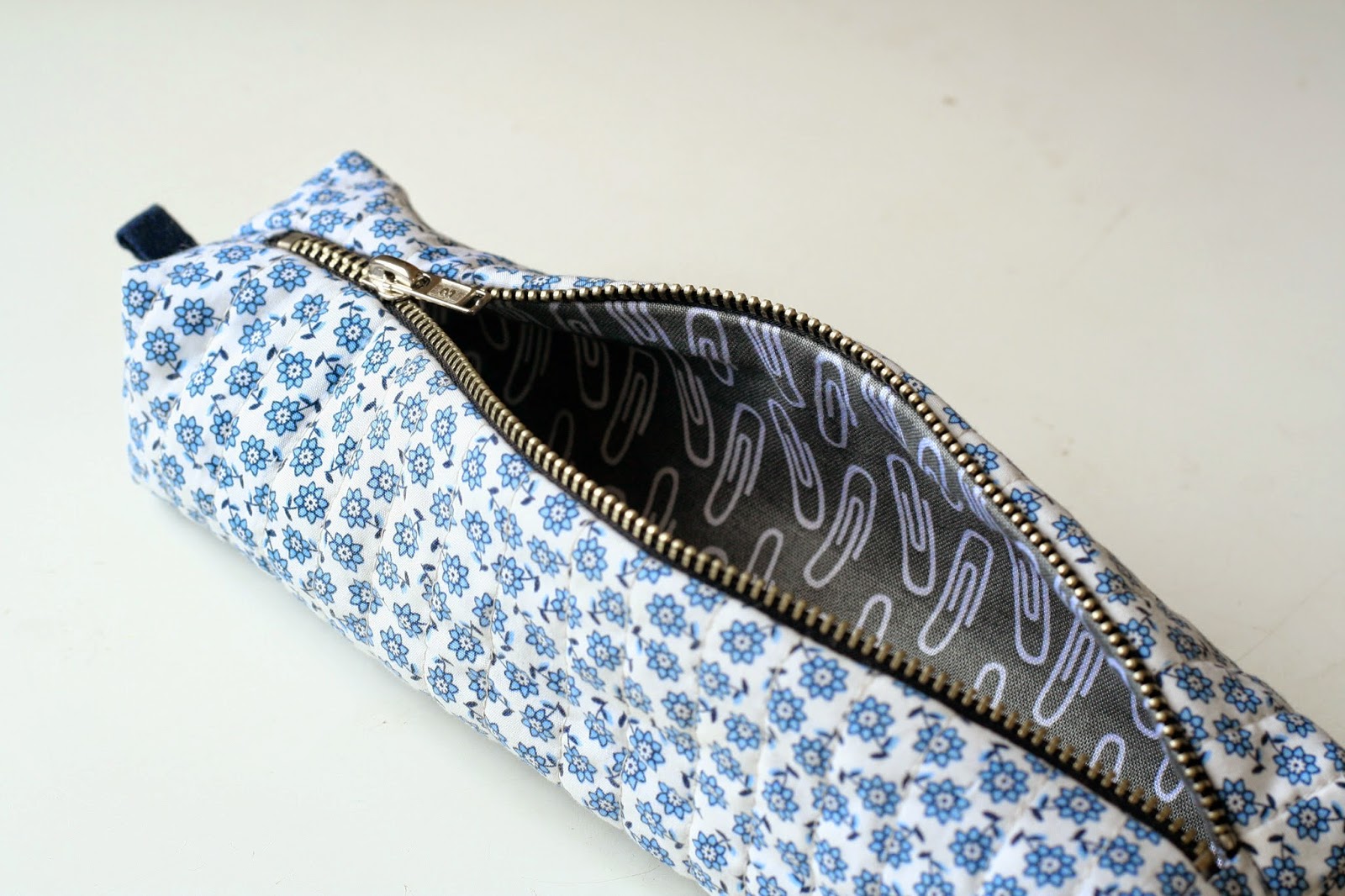 I cobbled together a few different approaches to this, gained from various tutorials and adapted to the size and shape I wanted. I always think this afterwards and I still don't do it, but I really should have made notes on what I did. I always think I'll remember and then I spend ages trying to figure it out all over again... 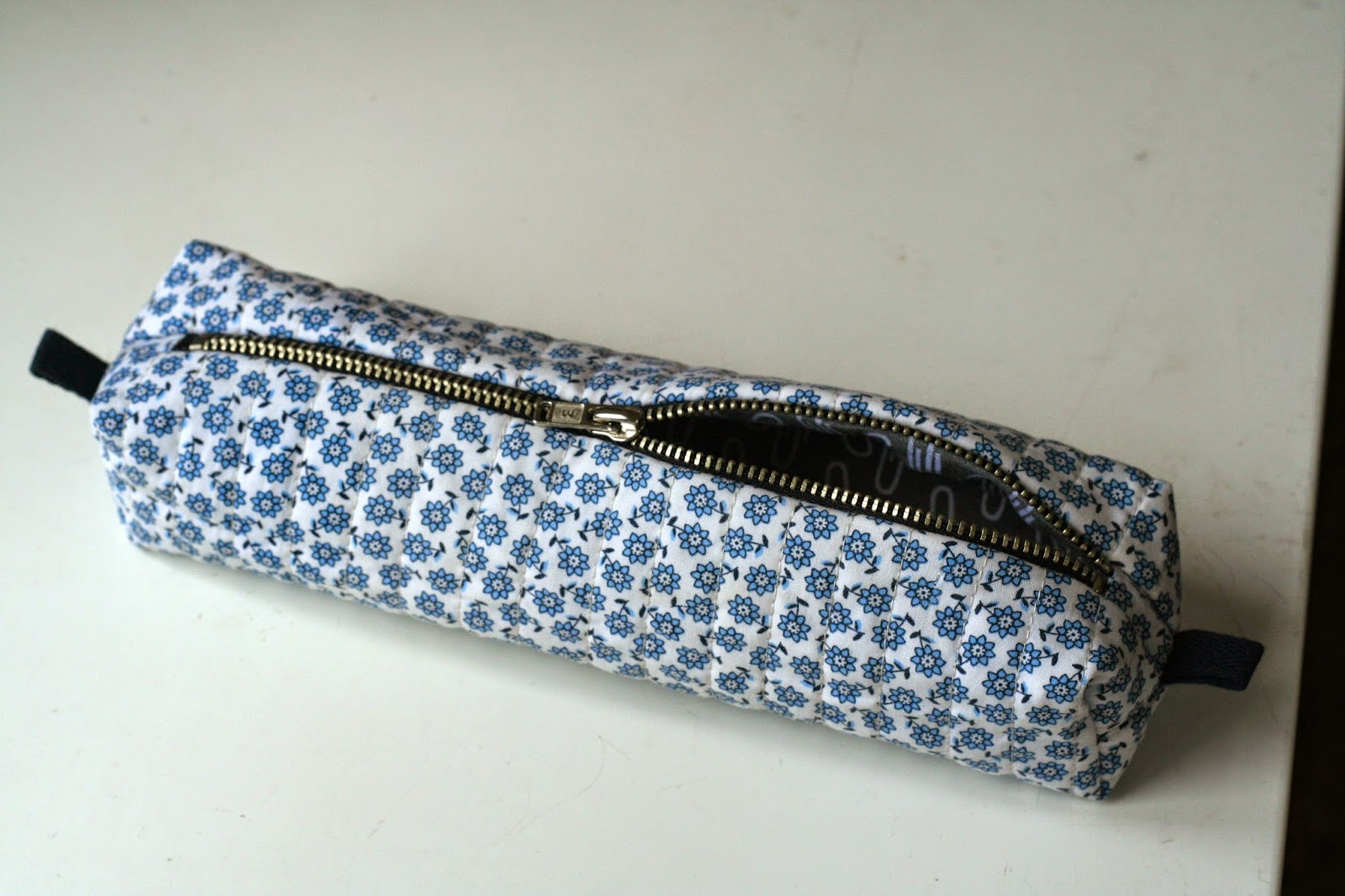 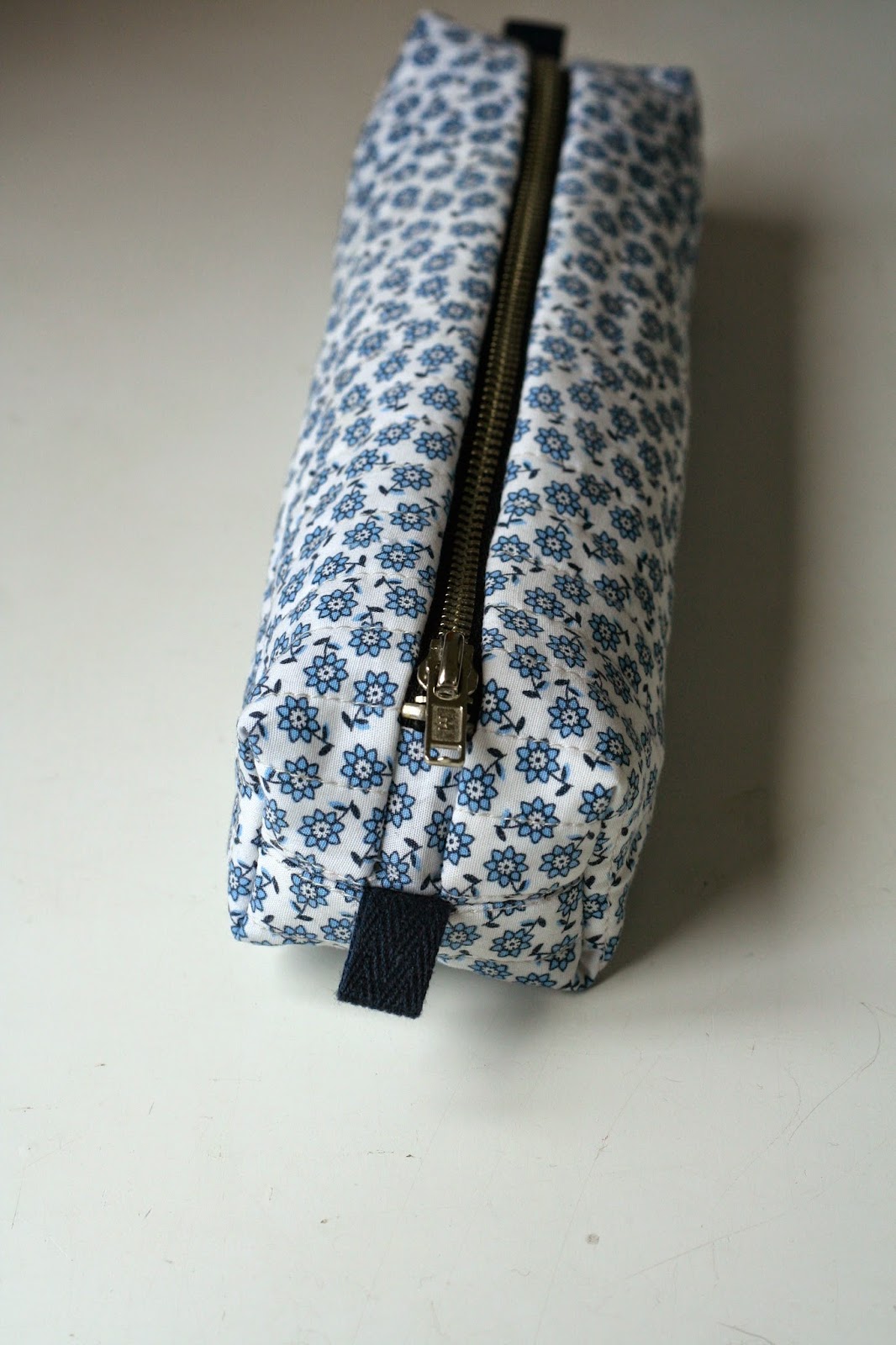 Next up was some hot pads/potholders for my sister.

Both Liz and my sister are among those poor unfortunates whose birthdays fall in the early January post Christmas hole, when people are just recovering from thinking of gifts and probably away on holiday too, so I often am late recognising my sister's birthday and often mired in good intentions which don't get realised!  To be on time I really would need to think of and send the gift before Christmas. So although I was late again, I enjoyed making these using some of the fabric I used in some mats I made for her another year. In fact this (grey floral) fabric was originally from Liz. Isn't the story of where fabric comes from part of its joy? I think the reddy orange is Kona Flame. 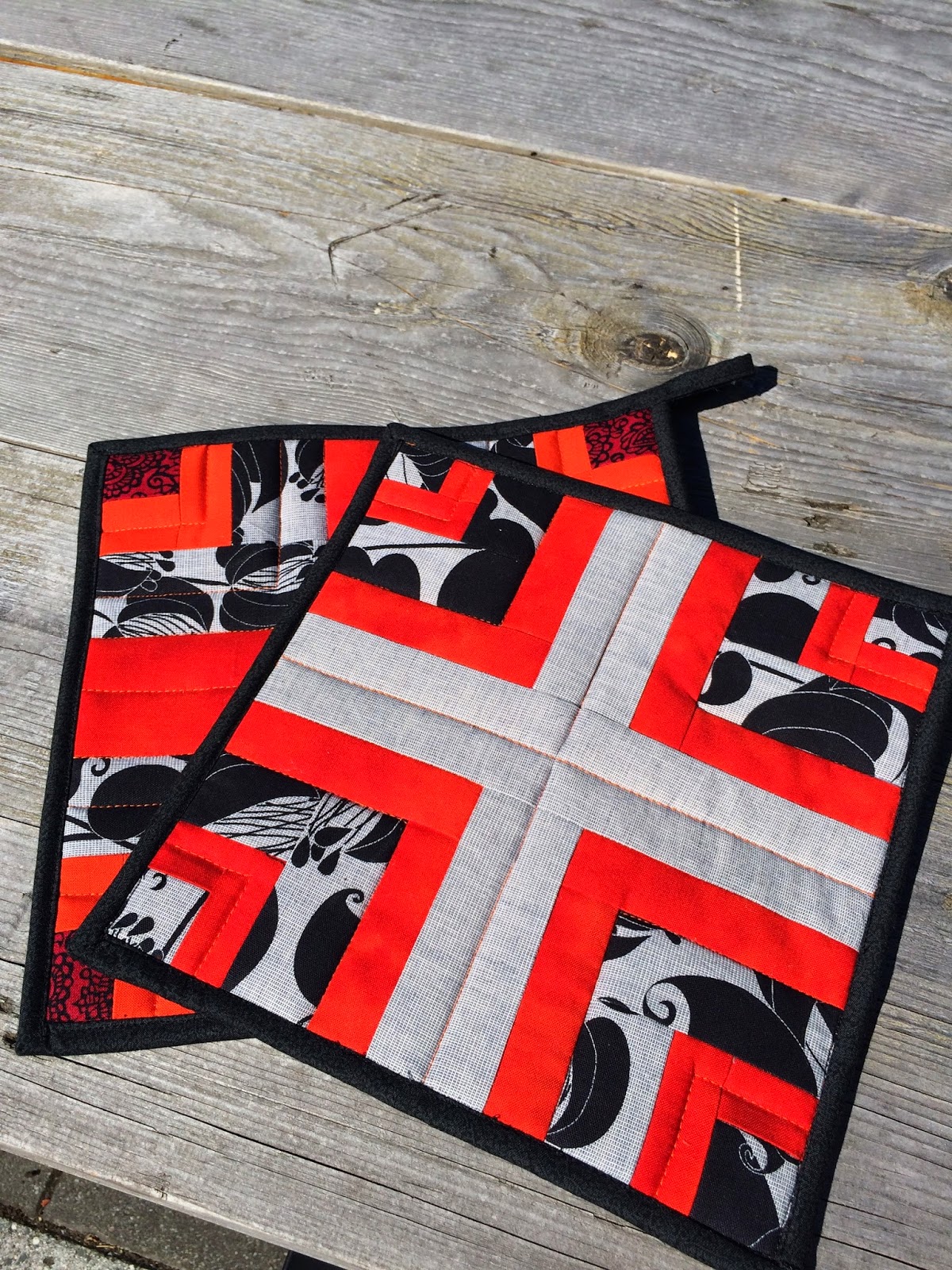 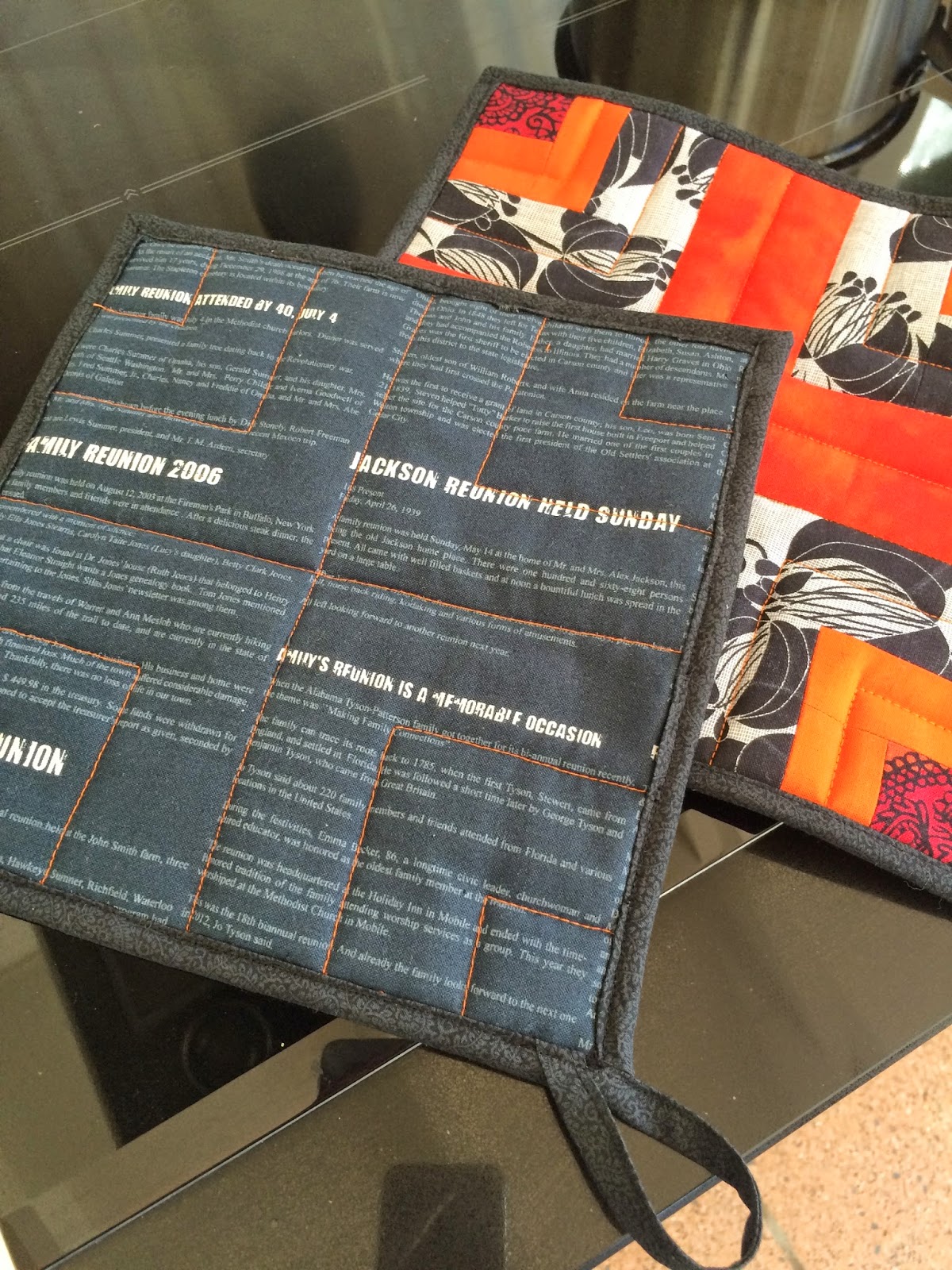 I just made log cabin blocks and cut and reassembled them. Finished with a black binding and loop made using an idea by Mary and Patch who is a Swiss quilter and fabric artist whose work you should check out if you don't already know it. 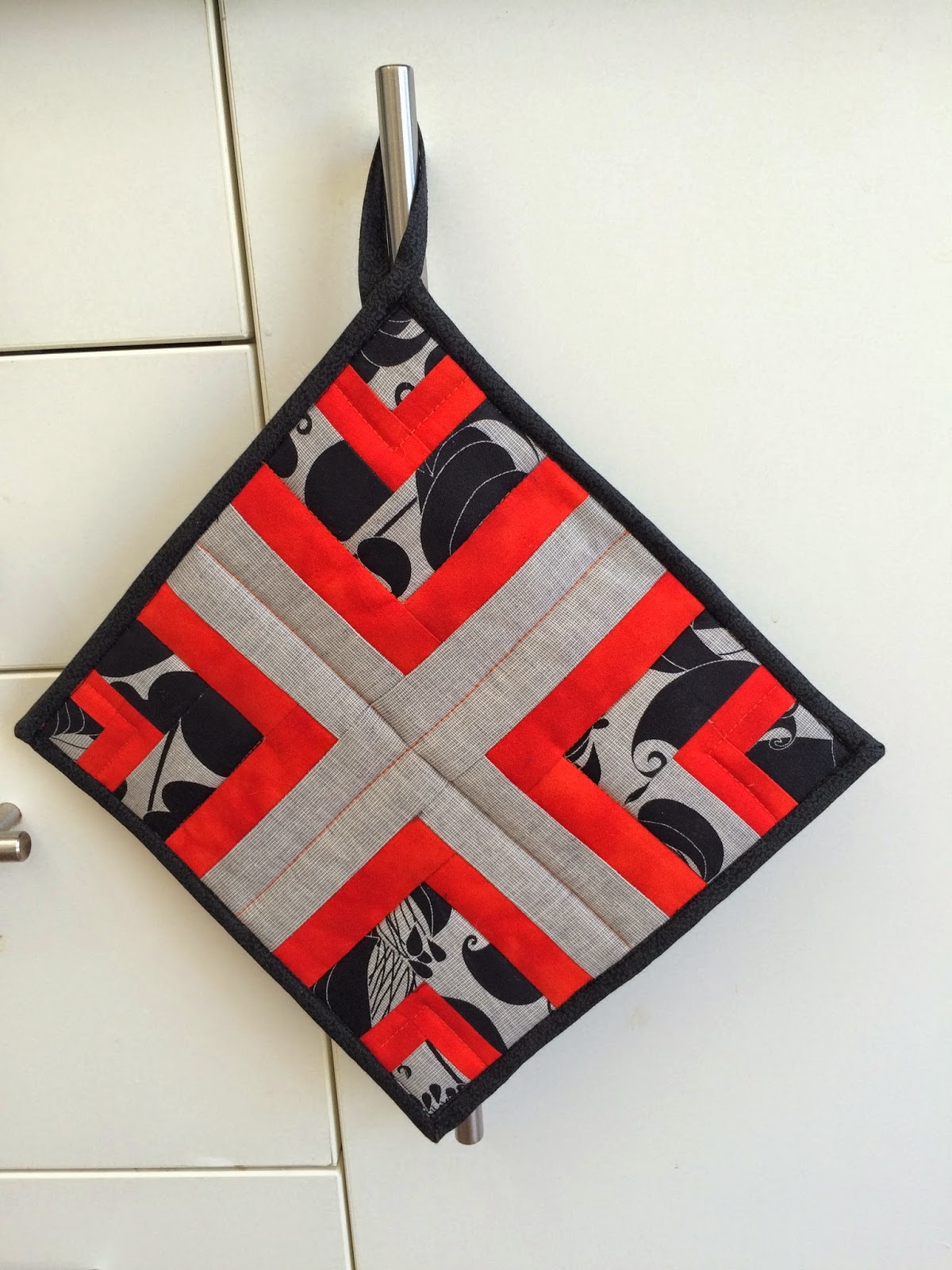 My final make this last month is for my mother-in-law's birthday. She is unfortunately quite sick and I thought she might make use of some fresh cheery pillowcases, which I hope are her colours. I used a Jay McCarroll Habitat print which I paired with an aqua shot cotton 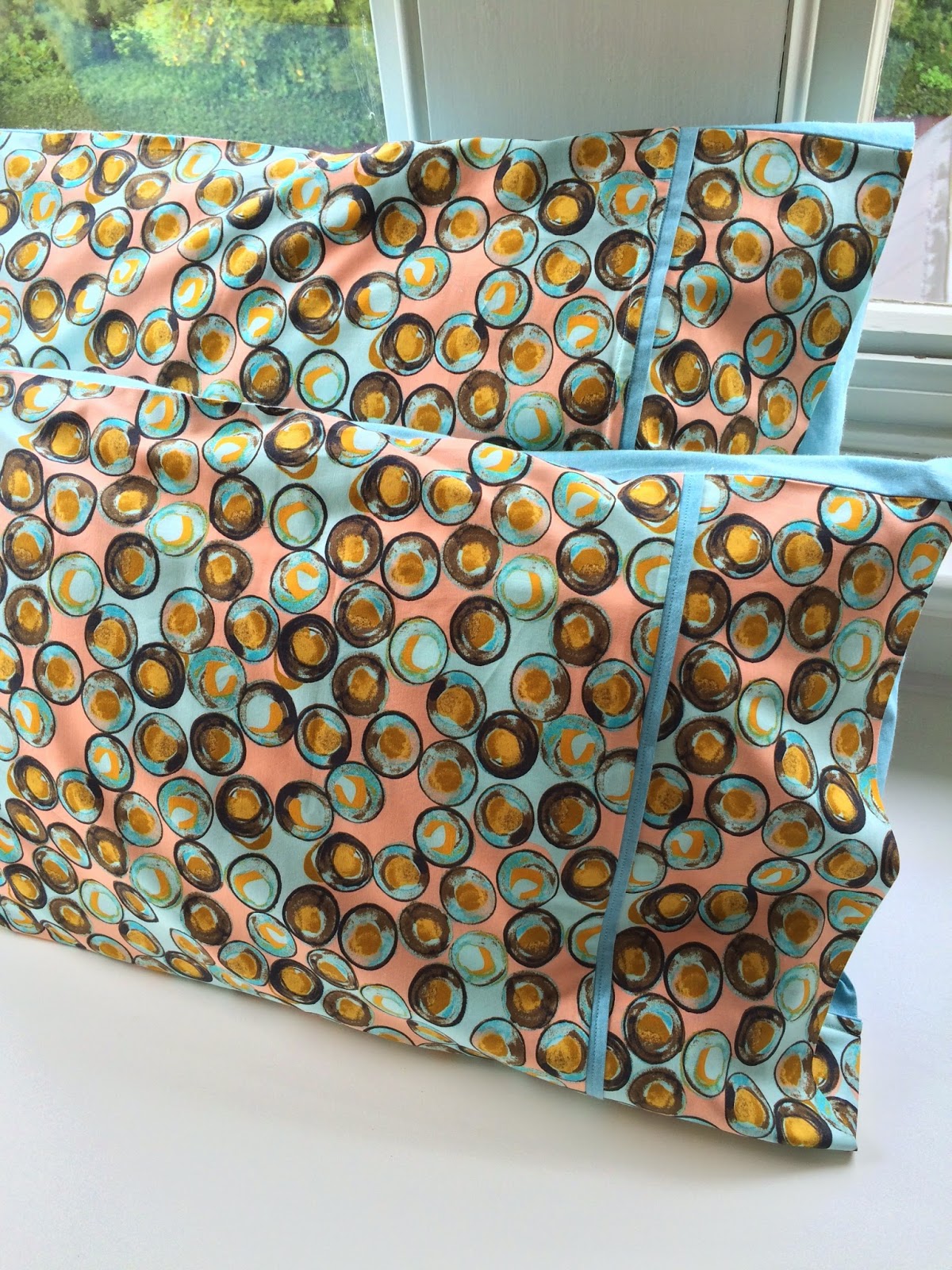 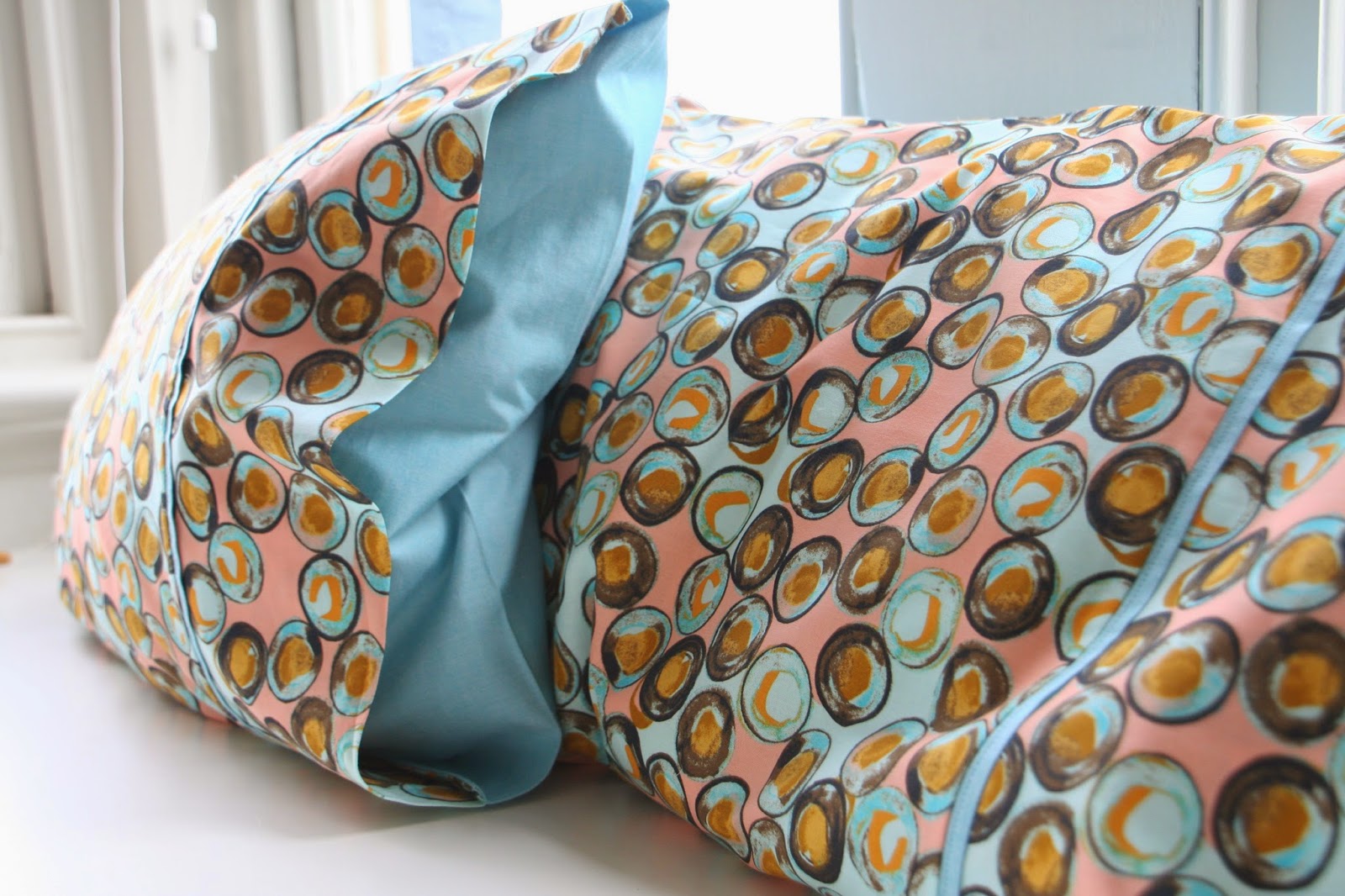 It's easy enough to figure out how to make a pillowcase which has to be one of the most simple shapes to sew; but I used this tutorial (from a lovely little Adelaide based store called The Drapery) because everything's measured and set out, why re-invent the wheel?  I wanted to do French seams to make the insides really neat. that's really easy, but it took longer than it should have because I made a couple of silly mistakes. Old habits of right sides together die hard and I folded the tuck in part the wrong way so had to tediously unpick. 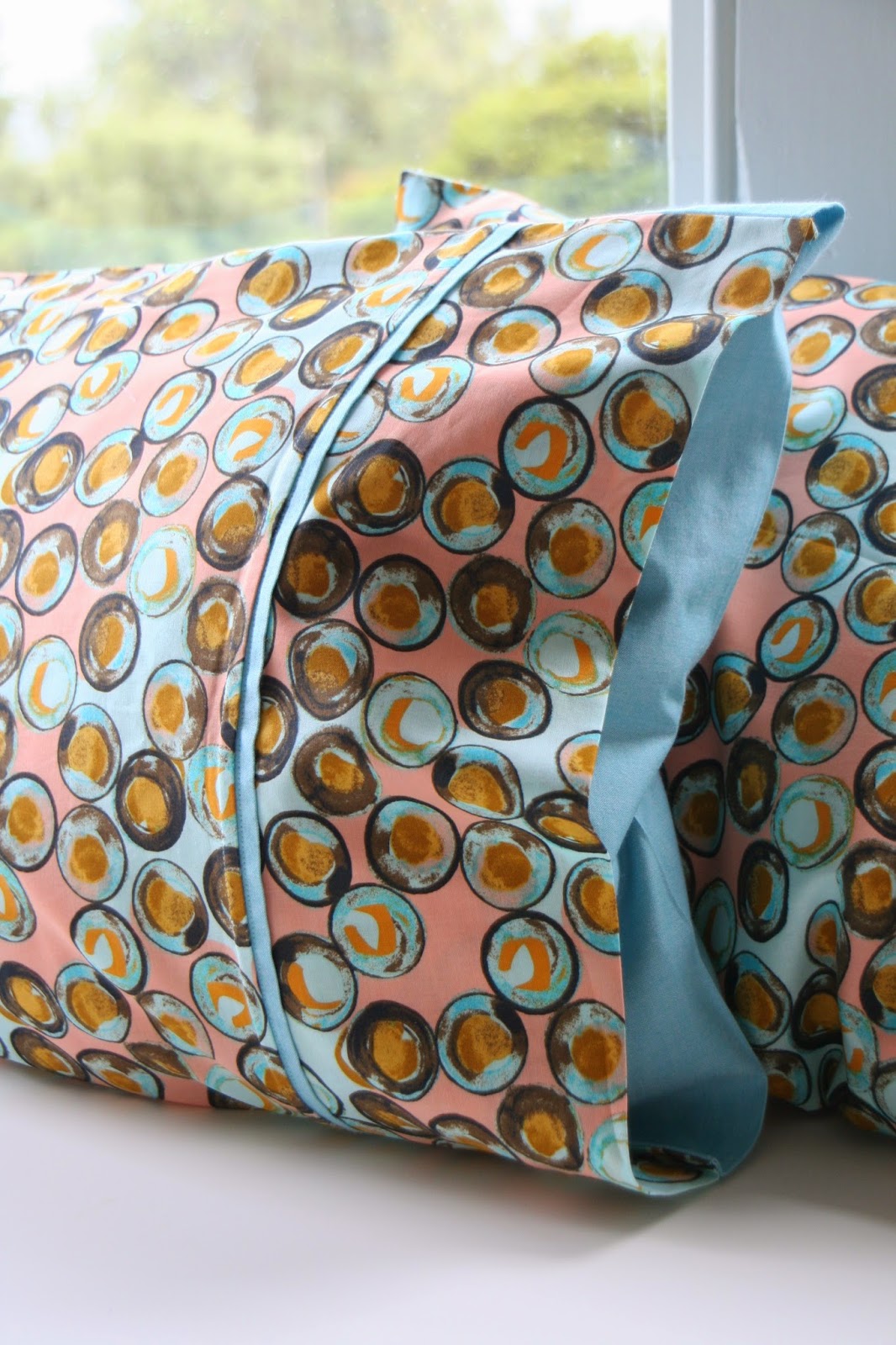 Anyway I'm satisfied in the end and I hope my mum-in-law likes them.


When I'm planning projects other than quilts and choosing fabric, I am inspired by what I have in my stash, but often I find I'm limited by not having enough of the one I choose. These things are relative I know, but I don't really keep an enormous stash. There's a tipping point between having enough on hand for the current inspiration and buying lots of fabric without a particular aim in mind. So I have decided that sometimes, instead of buying a fat quarter or even a half yard, which I've often found is not enough, I'll buy a bigger piece which will give me more flexibility in my making. Perhaps instead of buying a whole collection  of fat quarters which I've only ever done once with Carloyn Friedlander's Botanics and Architextures anyway,  I'll choose only the prints I love the most and get bigger pieces. I'll just need to allow myself to use them and cut into them rather than save them, which can be a barrier for me.

It'd be great to hear how others approach this.

It's so nice to have favourite fabrics on hand when I want to make something like a bag or pillowcases, which can't just be constructed from small pieces. Tough decisions, like buying more fabric, just have to be made sometimes!