By Jove I think She's Got It!

The wonders of the information available on the internet never cease to amaze me. Not to mention the fantastic interaction in the blogging community.  The lovely Annabella (who blogs at Life's Rich Pattern all the way from Morocco) left me a comment on my last post which simply said "I hope you don't pin...pinning is bad news for sure...much easier to ease", which sent me searching for answers.

In desperation after too many pins, puckers, unsmooth curves and consequent unpicking, I looked for tutorials on how to piece small tight curves and with in milliseconds (seemingly) had located Leanne's fantastic little video. Of course I'd come across Leanne's blog before and have been following for a while, so I wasn't surprised she'd posted this great little no-fuss tute.


My curved piecing improved exponentially as soon as I tried this method. I think some of the difficulty was also caused by the compounding error of me making my own not-quite-up-to-the-mark templates.

Living and learning (yet again)!
Posted by Camilla at 10:24 6 comments:

The Path to Drunkenness

Now I know why this block is called this (Drunkard's Path for those not in the know)!
It'll drive me to drink I swear! 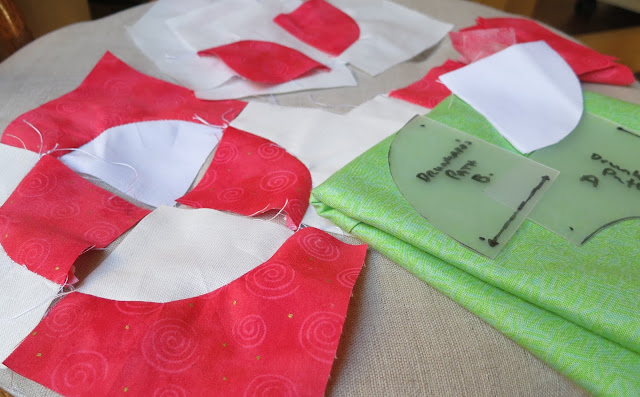 I've been procrastinating on this one for July's do. Good Stitches.  Still a few days left in July...Two blocks is enough! One warm and one cool. Good to have the opportunity to try something I'd never do on my own! Never say never!


That said, I did do this quilt incorporating curved piecing, but the bits were a bit lot bigger! Like maybe three times the size 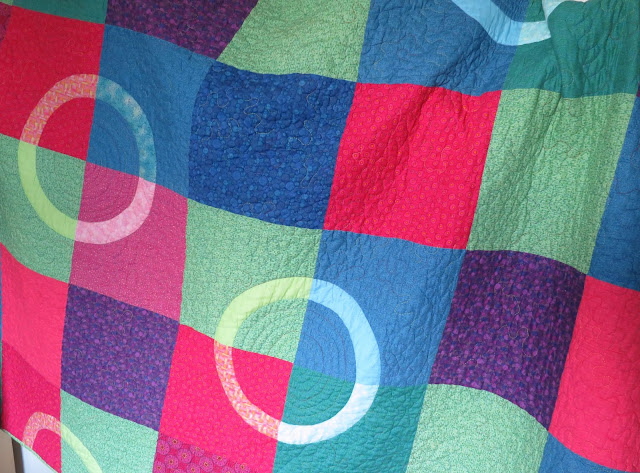 I laid out the Wonky Crosses so far. I think I'll need about 10 more blocks and am pondering what I need more of? Have some ideas, but canvassing opinions? 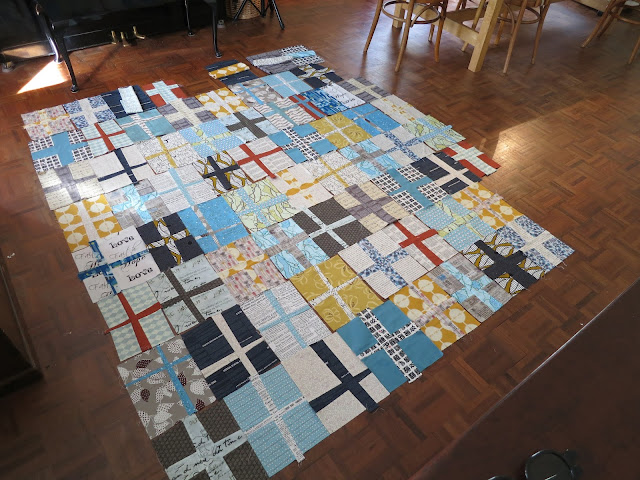 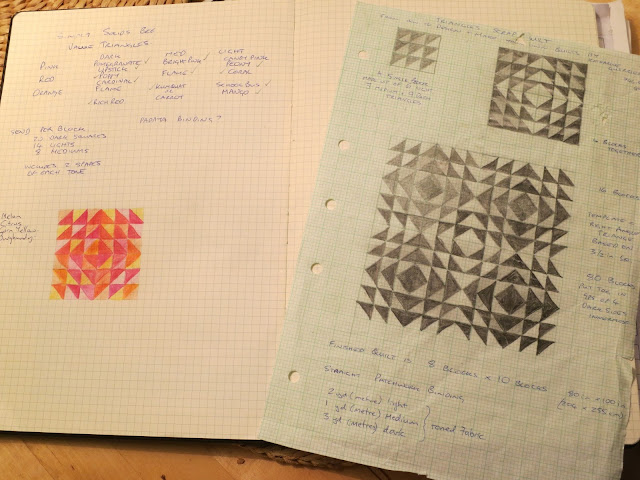 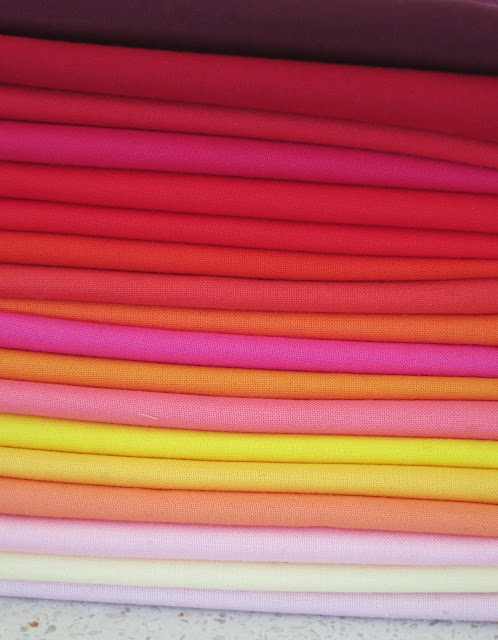 Now I'm off to make Osso Buco or we'll be having dinner at midnight!
Has anything been driving you to drink?

Linking up for the first time with Needle and Thread Thursday

Things have been kinda slow over here.

My work's been a bit slow, which has been good coz it's the school holidays. 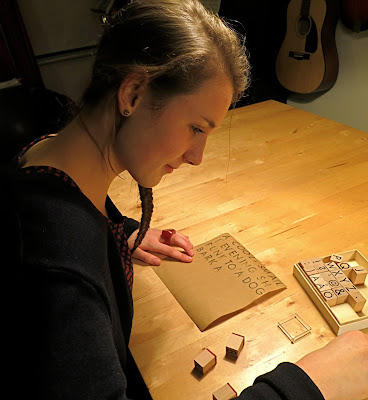 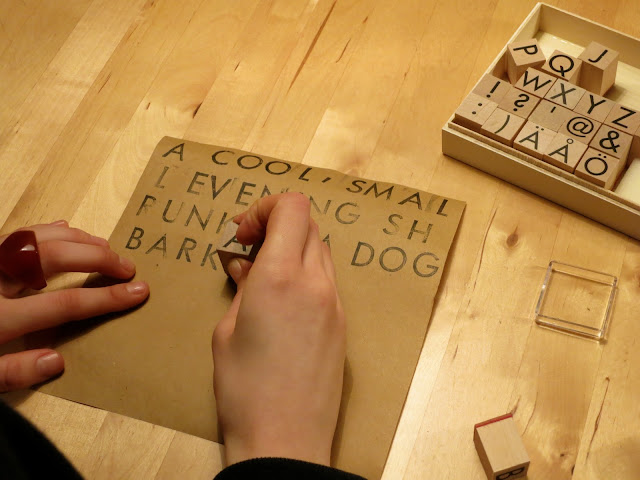 And it's been good to be about with the kids, including the oldest home from NZ for Uni holidays, hanging out with his brother in the kitchen in these photos, evidence for the fact that he even cooked us a few meals while he was home :-) 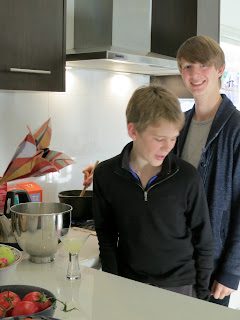 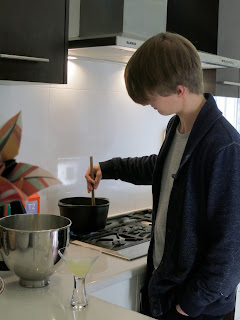 We're sorting out towards a move back to NZ at the end of the year.

I'm in the midst of instituting a new and efficient filing system (hmm I fear in my secret self that however good the system is, it's the filer here who's not so efficient) and going through every cupboard and drawer. Sorting out's been slow, I'm not good at making long term decisions about what to chuck out. I've been burnt in the past by chucking out things I shouldn't have and consequently now probably keep too much. That, and I'm super indecisive and can't bear to waste something that might come in useful later. It probably won't, but as soon as I chuck it out I'll think, now where's that little box that'd  be perfect for this....!

We also have to prepare the house for sale, which means means tons of little jobs, yet keeping the big picture in view, so not being too detailed about it.

Even tho' things have been slow, time's going fast somehow and I don't want to live towards next year while I'm preparing. We're here now and I want to savour it. So in a way I want to slow down.

I've been slow sewing and blogging too.

I'm still playing with the Oakshotts and ideas are synthesising for a quilt with them. I have some sketches, but really I just have to take the plunge with my idea. I'll show you bits soon.

This quilt which has been stalled for ages at the quilting stage is finished except for the binding, but now I've decided (almost) to remake it! 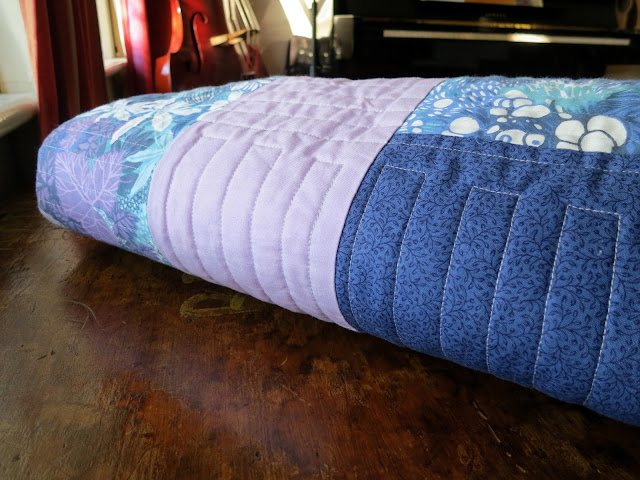 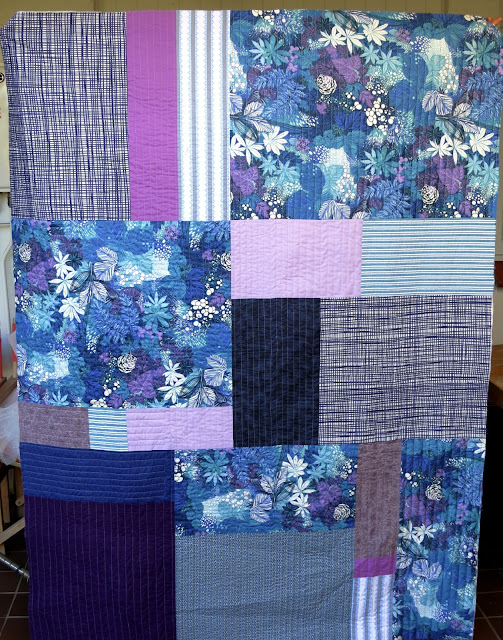 I love that feature 60s floral so much that I didn't want to cut it up too much. Liz made a stunning quilt with big pieces of Japanese fabric which inspired me- here's just a section of it 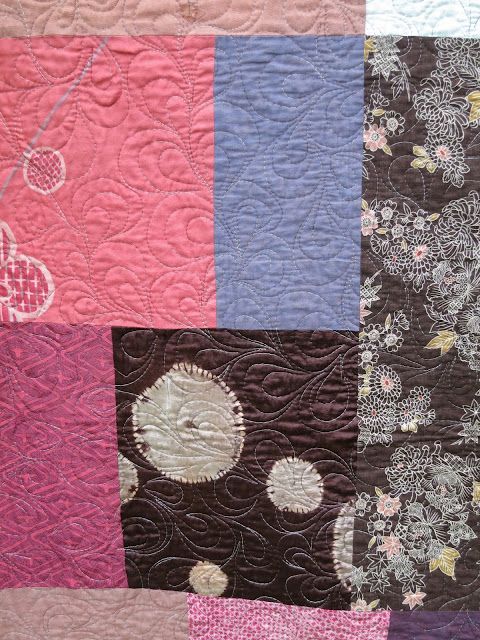 But even though  I love I'm happy with the back of my new one and even the quilting in the end... 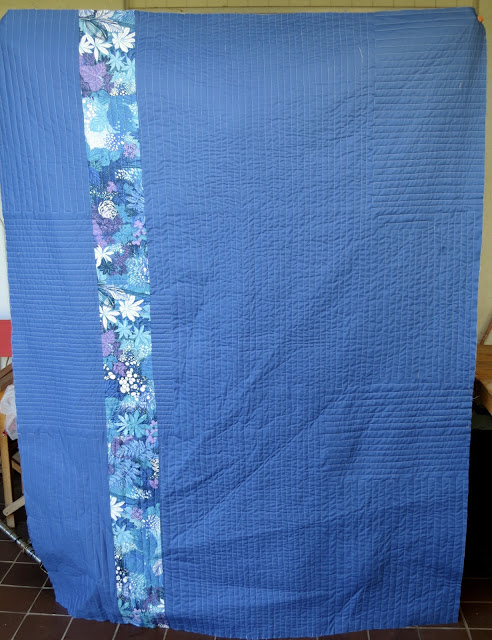 It just doesn't do it for me. Last weekend I finished the quilting and then straightaway I SOOO nearly cut it up to make this inspiration of Ashley's.

Which I'm sure is a much better use of the lovely big scale. I'd convinced myself to cut up the finished quilt to make it quilt as you go and just add a new backing over the top of the old one and stitch in the ditch around the hexagons. But...then I waste the strip of floral on the back. I suspect the solution is to unpick the quilting and re-make it properly. Not sure I've got the energy for that yet, having just finished all that quilting after so much procrastinating; so maybe I should just bind it and use it and re-do it down the track?!

Do you ever have dilemmas like this or is it just me?

I have made the July block for the Simply Solids Bee 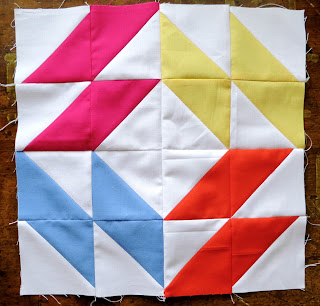 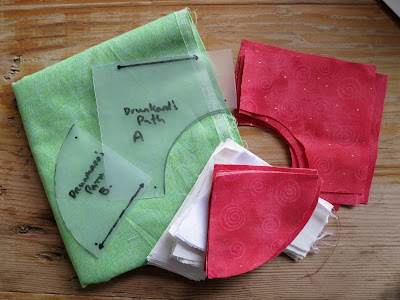 Just as well there's a Slow Blogger linky to join!

I have been playing with these recently. 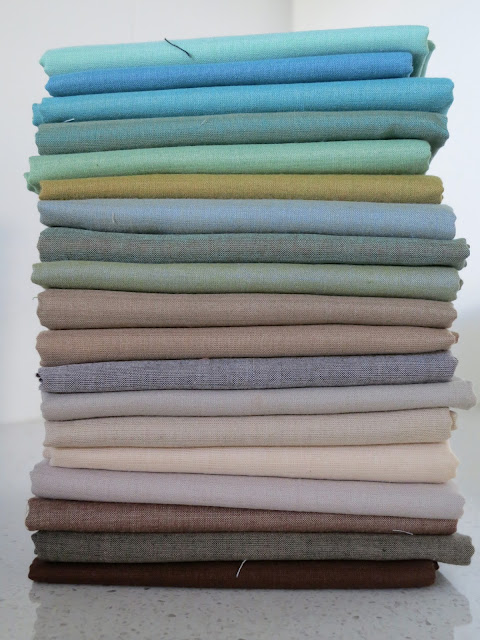 I only dared to cut an inch or an inch and a half off each... 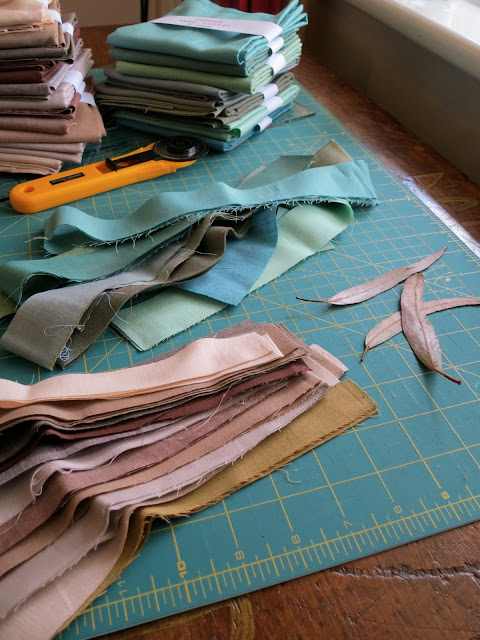 Not entirely to good effect! 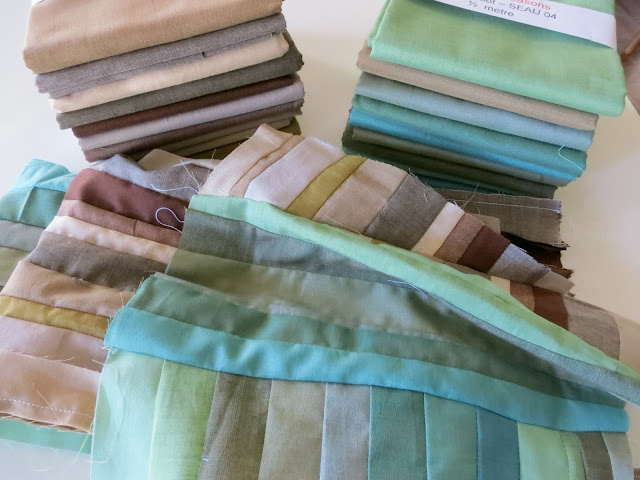 Gum trees and bark have long inspired me and I had an idea which I fear is doomed (aren't I brave showing you my failures)! 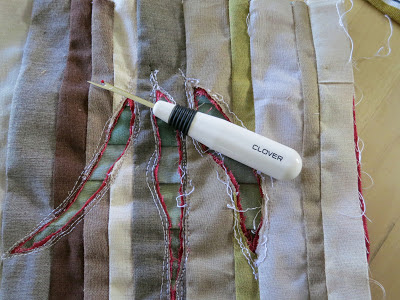 I've worked out what's wrong I think- colours too close and scale of strips is wrong, but I am confident something new will emerge.- so thinking again...

And trying to tell myself that this is how I learn to be creative... 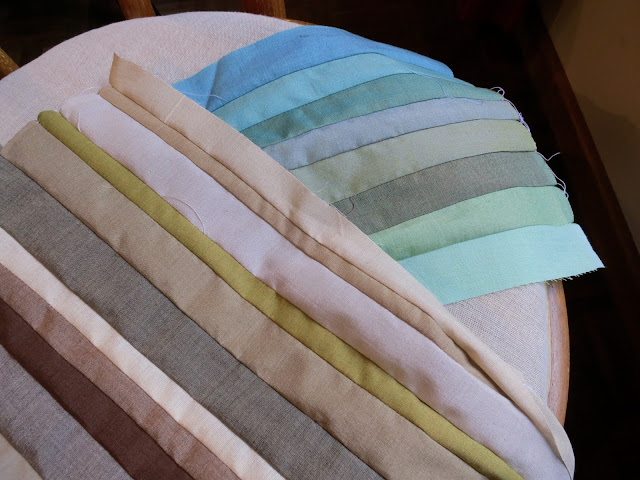 Trouble is... I don't think I'll be able to find it without cutting into that lovely stack a bit more daringly...!

Linking up with Fresh Sewing Day and Small Blog Meet at Lily's Quilts
Posted by Camilla at 16:35 12 comments: