There's nothing like a deadline for getting going on a project! I'm lucky enough to be part of an online group called Four in Art where we challenge ourselves to come up with a quilted something to fit a given theme four times a year. This year's theme is Colour and this quarter it's Microscopic Colour. I found it a pretty inspiring theme and had several ideas which I could have followed up on. Whether they would have worked is another thing, but nice to feel inspired to begin with!

I remembered seeing these brightly coloured images of microscopic algae, but I didn't remember they were called Diatoms. An image web search of "microscopic colour" quickly located and named them for me. Apparently the Victorians had a thing for photographing them and arranging them in patterns, often in circular forms. 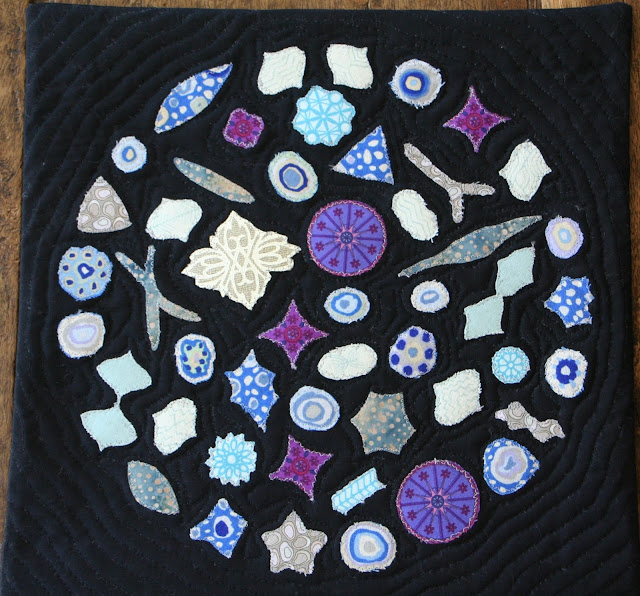 Diatoms are widely varying in form, but almost always show bilateral symmetry so I thought I could use patterned features of fabric from my scraps and cut them out and fuse them onto a background.
I have done almost no appliqué and have always shied away from fiddly edges, so wasn't sure how this would go. I decided to raw edge appliqué them, hoping that the stitching would represent the silica cell wall that is a defining feature of diatoms. I think I could have made more of this perhaps with a denser stitch. To be honest I was a bit scared of ruining it. If I'd had more time I could have experimented with that step a bit more. 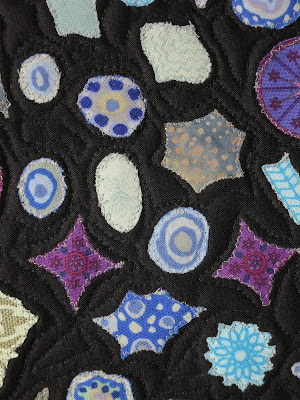 I decided to do free motion echo quilting around the shapes in black thread. I thought about using monofilament for a bit of shine, but ended up deciding on the plain black.

To finish I used a facing (tutorial here) rather than a binding as I though the binding would provide a too dominant defined edge on such a small piece. It finishes as 12" square.

One slight issue which I hadn't anticipated, is that I used cotton bamboo batting which I had on hand, but it has bearded very slightly. I was trying to remove the dust/lint and on close inspection realised that the quilting process has actually pulled very tiny threads of batting up to the top of the piece. I haven't struck this before, perhaps I'm just noticing this because of the dark background. I'd be interested to know if others have had this issue before and what to do about it?

Can't wait to see how others have been inspired by the theme. You can check them all out here on the Four in Art blog from 6am Monday 1st Feb US EST. Being in NZ I think I have a slight head-start.
Posted by Camilla at 11:55