This theme really had me stumped for a while! Purple really isn't my colour, but then I realised that I've used it quite extensively in each of the previous two Four in Art projects. It's not a colour I choose to wear or have around much in my home, but maybe I have a secret hankering if I've voluntarily chosen to use it in those other projects?!

My first thoughts were to do a zoomed in Passion Fruit similar to this clip art image I found, which I thought I could have fun with, practicing my paper piecing! But after drawing up something I got a bit daunted and as well, decided it was too literal an image for the theme. 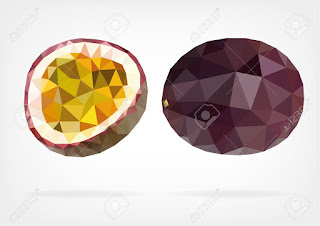 The other idea that had sprung immediately to mind was something ecclesiastically purple, to do with Passiontide. The particular shade of purple for this season in the church calendar is the one I think of when I think of purple. This is often synonymous with Holy Week and represents Easter and Jesus' death and resurrection, particularly as celebrated in Anglican  and Catholic churches.
I wanted to do a pared down ecclesiastical cross with linen; which would also have symbolic importance at Easter, as Jesus' body was wrapped in linen cloths, as he was as a newborn, according to the Gospels.

I love the look of a natural linen and the way it tones down and complements purple which is naturally more "shouty". These shot cotton purples are rich and subtly textured. (Albeit hard to photograph!) 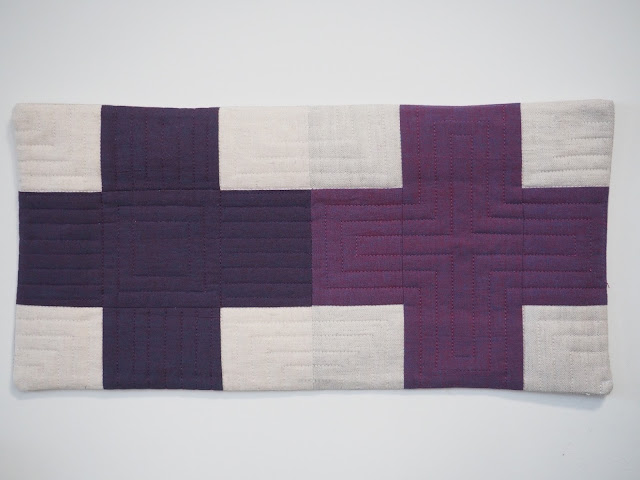 I'm not sure which orientation it should have, perhaps I should add two hanging sleeves so I can switch according to whim? 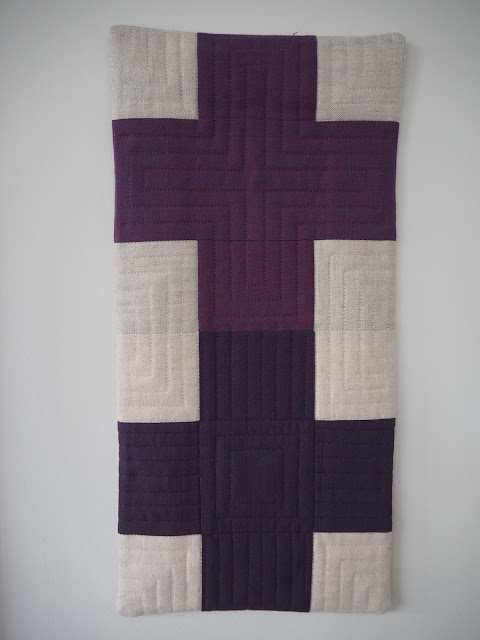 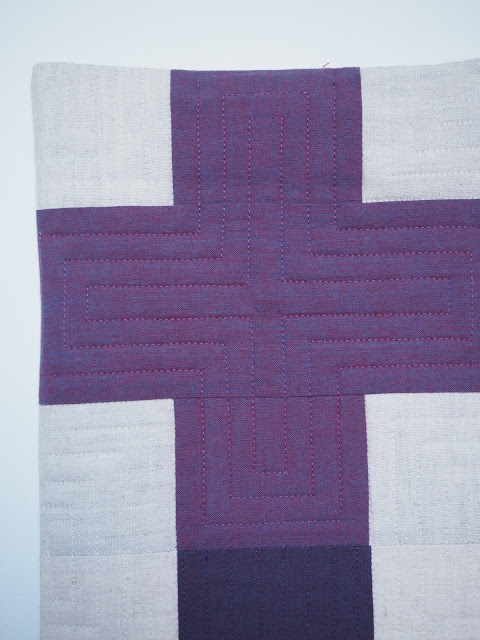 This one almost captures the iridescence of the shot cotton. 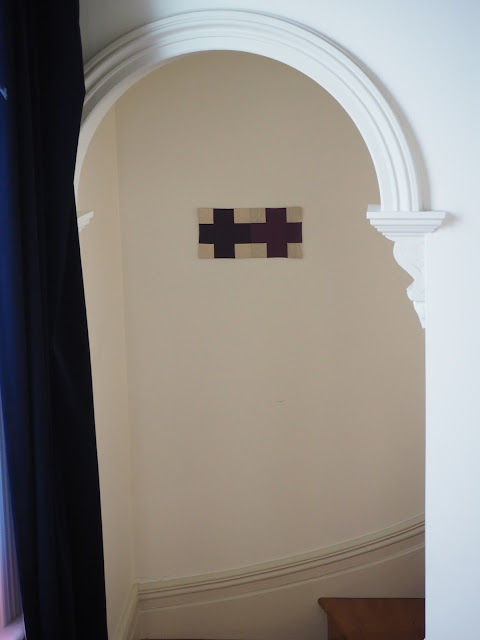 It looks quite monastic in this stairwell archway. 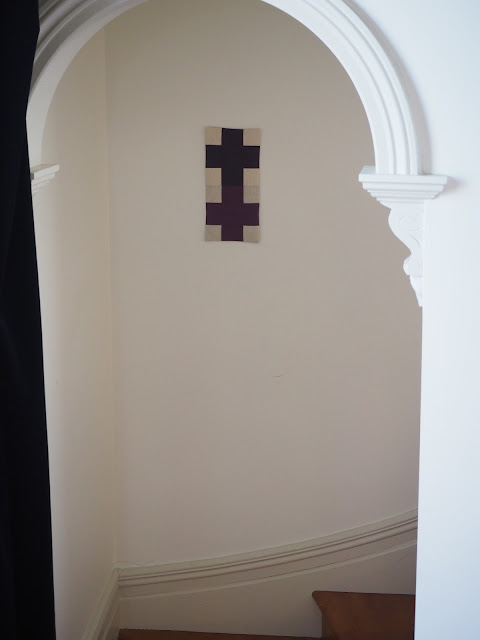 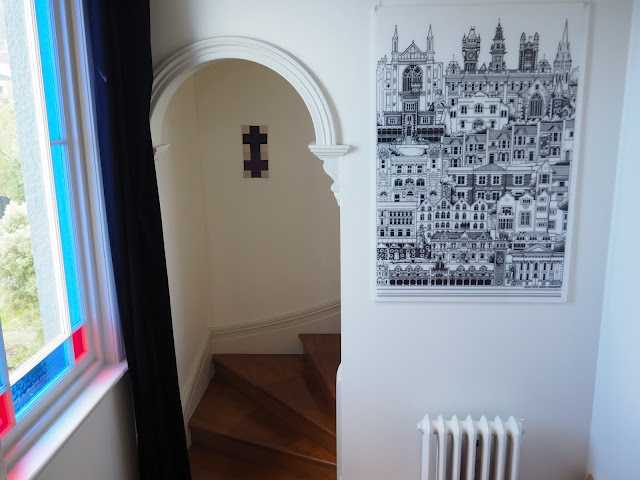 A bit different again with my daughter's mobile creation. 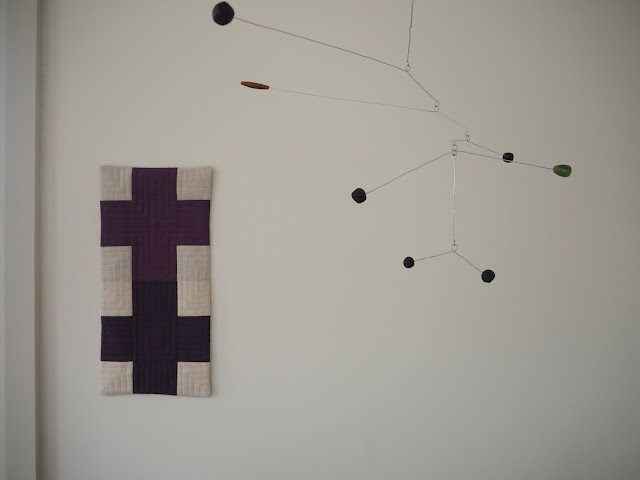 The simple design form holds meaning if you want to see that aspect, but if that isn't significant to the viewer, I like that the form is pleasingly pared down and simple. The two forms are related but distinct, rather like Father and Son. I considered adding a third trinitarian cross, but this looked too blatantly symbolic for me and I liked the balance of the two halves. 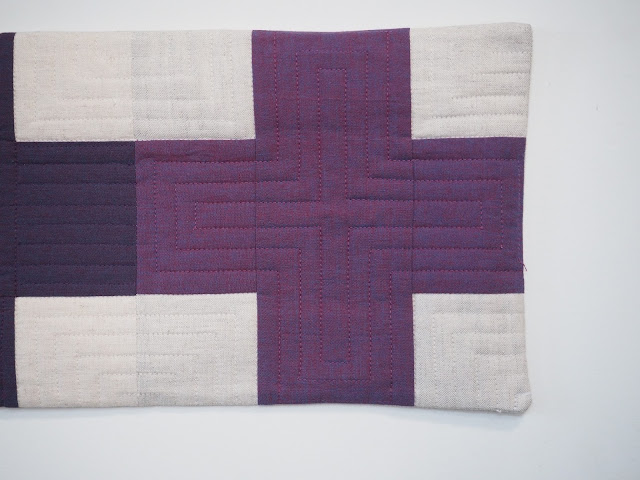 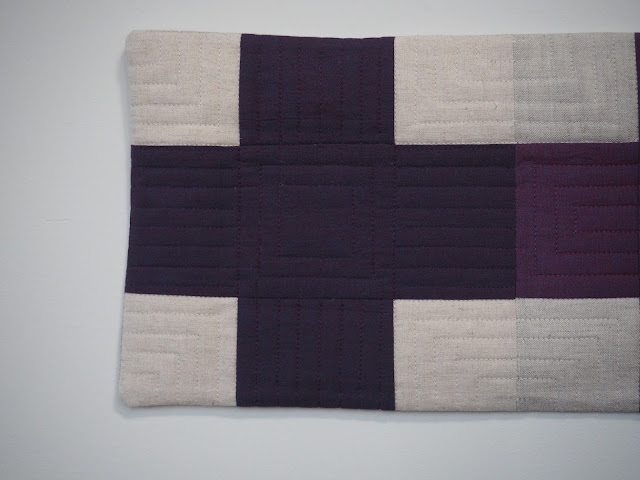 I quilted each cross complementarily rather than identically and finished with a simple linen facing and I'm thinking that perhaps I'll block it before I add the hanging sleeve(s)? I've never blocked anything before and don't mind the slightly softened edges but think it might benefit from a little more shaping?

This quarter I'm happier with the result and pleased that I started super early though apart from unpicking some quilting I wasn't happy with on one of the blocks, I didn't have any major revisions to do.

The size measures 18x37.5cm or approx 7"x15" and uses linen and cotton with cotton/bamboo batting.

Do check out all the other entries for our group at Four in Art from 1st August (according to the time somewhere in the US!)